The 2019 Nobel prize for physics, awarded by the Royal Swedish Academy of Science, rewards -new understanding of the universes structure and history, and the first discovery of a planet orbiting a solar-type star outside our solar system" 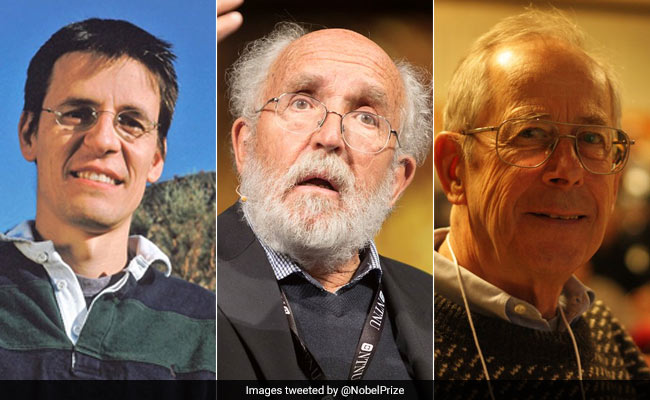 James Peebles, Michel Mayor and Didier Queloz were awarded the Nobel Prize 2019 for Physics on Tuesday

The 2019 Nobel Prize for physics was awarded on Tuesday to Canadian-American physicist James Peebles, and Swiss scientists Michel Mayor and Didier Queloz, by the Royal Swedish Academy of Sciences.

James Peebles won one half of the prize for "theoretical discoveries in physical cosmology", and the other half was jointly shared by Michel Mayor and Didier Queloz for "the discovery of an exoplanet orbiting a solar-type star."

"My advice to young people entering science: you should do it for the love of science ... You should enter science because you are fascinated by it," said James Peebles on Tuesday, soon after the announcement.

James Peebles's "theoretical framework, developed over two decades, is the foundation of our modern understanding of the universe's history, from the Big Bang to the present day," said the official Twitter handle of the Nobel Prize.

2019 #NobelPrize laureate James Peebles took on the cosmos, with its billions of galaxies and galaxy clusters. His theoretical framework, developed over two decades, is the foundation of our modern understanding of the universe's history, from the Big Bang to the present day. pic.twitter.com/fly4alndv9

In 1995, astrophysicist Michel Mayor and astronomer Didier Queloz discovered the first exoplanet -- a planet outside our solar system -- orbiting a solar-type star, 51 Pegasi. Reacting to their win, the two scientists said it was "simply extraordinary".

The discovery by 2019 #NobelPrize laureates Michel Mayor and Didier Queloz started a revolution in astronomy and over 4,000 exoplanets have since been found in the Milky Way. Strange new worlds are still being discovered, with an incredible wealth of sizes, forms and orbits. pic.twitter.com/nqhJcJGJTv

The 2019 prize rewards "new understanding of the universe's structure and history, and the first discovery of a planet orbiting a solar-type star outside our solar system. The discoveries have forever changed our conceptions of the world," said the Nobel Academy in a statement.

The prize consists of 9 million Swedish krona (about $914,000) , which will be split with one half to James Peebles and the other half shared by Michel Mayor and Didier Queloz. The winners will also receive a gold medal, a diploma.

The medals will be awarded at a ceremony in Stockholm on December 10, the death anniversary of dynamite inventor Alfred Nobel, who created the prizes in his will.

The Nobel Prize for Physics was awarded a day after three researchers from the US and Britain shared the Nobel Medicine Prize for discoveries on how cells sense and adapt to oxygen availability.

The prize for Chemistry will be awarded on Wednesday.

The Swedish Academy will announce the Nobel Prize in Literature for both 2018 and 2019 on Thursday. The 2018 award was postponed for the first time in 70 years after a sexual harassment scandal hit the board of the academy.

On Friday, the scene moves to Oslo, Norway where the Nobel Peace Prize will be announced. Teen climate activist Greta Thunburg has emerged as the "bookies' favourite" this year.

Finally, the Sveriges Riksbank Prize in Economic Sciences in Memory of Alfred Nobel 2019 will be announced on October 14, wrapping up the Nobel Prize season.