Nobel Prize In Literature 2019: The prize, considered to be the most prestigious award in the literary world, have been awarded to 114 people since 1901, of which only 14 are women. 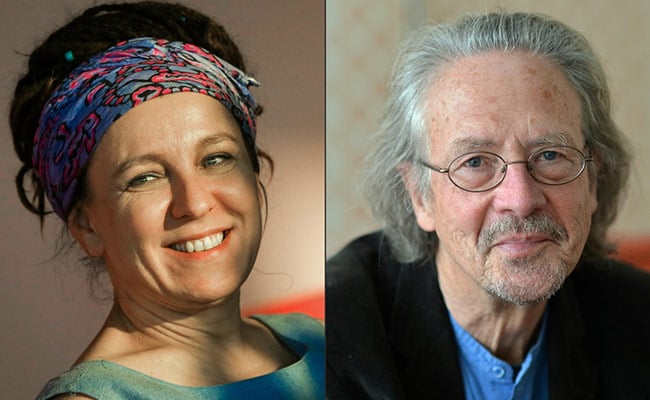 Polish author Olga Tokarczuk and Austrian novelist Peter Handke have been named the 2018 and 2019 winners of Nobel Prize for Literature, the Swedish Academy announced on Thursday. The prize was postponed in 2018 for the first time in 70 years after the academy was hit by a sexual assault scandal at the height of the MeToo Movement, leaving the institution paralysed.

Olga Tokarczuk, author of 'Ksiegi Jakubowe' ('The Books of Jacob'), won the prize for "for a narrative imagination that with encyclopedic passion represents the crossing of boundaries as a form of life," the jury said.

The Polish writer was described by the Swedish Academy as someone who "never views reality as something stable or everlasting. She constructs her novels in a tension between cultural opposites; nature versus culture, reason versus madness, male versus female, home versus alienation".

Peter Handke, who once called for the Nobel Literature Prize to be abolished, won the prize "for an influential work that with linguistic ingenuity has explored the periphery and the specificity of human experience," said Mats Malm, Permanent Secretary of the Swedish Academy.

The academy praised Peter Handke's work which, it said, "is the extraordinary attention to landscapes and the material presence of the world, which has made cinema and painting two of his greatest sources of inspiration.

In 2014, Handke told Austrian media that the Nobel Literature prize brings its winner "false canonisation" along with "one moment of attention (and) six pages in the newspaper," news agency AFP reported.

Both winners will receive 9 million Swedish kronor ($912,000) each, along with a medal and a diploma at a formal ceremony in Sweden on December 10, the death anniversary of dynamite inventor Alfred Nobel, the creator of the Nobel Prizes.

The Nobel Literature Prize, considered to be the most prestigious award in the literary world, has been awarded to 116 people since 1901, of which only 15 are women.

Several literary critics had predicted that at least one of the winners would be a woman, after the sexual harassment scandal engulfed the academy.

The scandal hit in November 2017 when Swedish poet Katarina Frostenson, one of the 18 Academy members, resigned after a row over the handling of sexual assault charges against her husband, Jean-Claude Arnault. He was later convicted and sentenced to two years in prison for rape.

Katarina Frostenson's resignation was followed by that of six other members, including then permanent secretary Sara Danius. Academy members are elected for life and prior to this scandal, could not have resigned.

The academy has since been trying to restore its reputation. It has elected new members and revamped its statutes, allowing members to resign and increasing transparency.

The scandal also exposed conflicts of interest, harassment and a culture of silence among the members of the Swedish Academy, who are considered the country's guardians of culture.

The academy elects four or five members for a three-year term to a Nobel Committee which shortlists the candidates for the prize. Since the scandal, the Nobel Foundation -- which funds the Nobel Prizes -- has insisted that five external members join the committee.