Nike revealed Monday that Colin Kaepernick would be featured in its 30th anniversary "Just Do It" campaign. 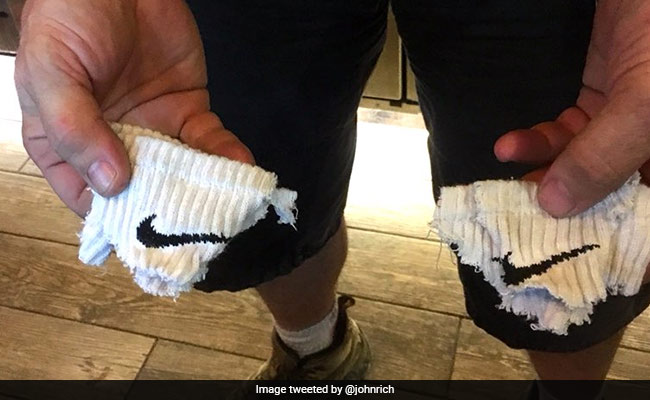 Country star John Rich showed off a pair of Nike logos that had been removed from his sound man's socks.

Some sliced the swooshes right out of their socks. Others lit their shoes aflame and filmed while they burned in their yards. All had strong feelings about Nike's new "Just Do It" campaign and one of its newest faces: Colin Kaepernick.

Nike revealed Monday that Kaepernick - the out-of-work NFL quarterback who generated controversy for kneeling during the national anthem to protest racial injustice and police brutality - would be featured in its 30th anniversary "Just Do It" campaign.

"Believe in something. Even if it means sacrificing everything," read a teaser for an ad Kaepernick tweeted.

The ad stood out as a bold statement on racial justice from Nike and as the latest demonstration of the company's values, experts said. While companies often steer clear of taking any firm stance on race relations, experts said Nike has claimed the fight for racial equality as a tenet of its mission.

Some Kaepernick critics took that to mean sacrificing their Nike products.

Immediately, people began posting pictures of socks and shoes they had defaced or destroyed, or declaring they would be soon switching allegiances to Adidas, Brooks or Converse. (Never mind that Nike owns Converse.)

Country star John Rich showed off a pair of Nike logos that had been removed from his sound man's socks.

A video of a pair of shoes that had been set on fire went viral.

The anti-Nike puns came next.

"Just Blew It," posted another.

President Donald Trump has been persistently critical of NFL players protesting during the national anthem, a movement Kaepernick launched. Trump and others have frequently mischaracterized Kaepernick's protests as being against the anthem or the American flag. 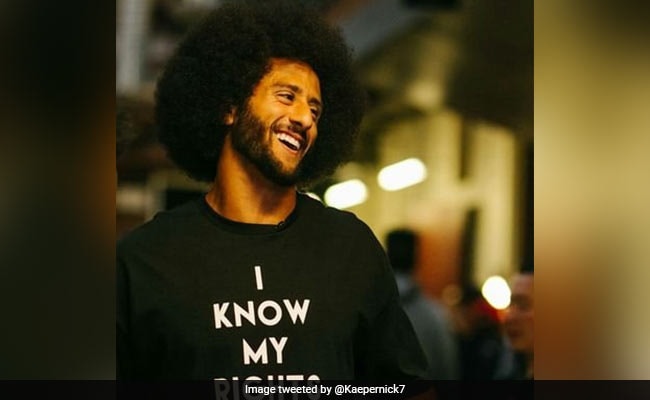 Nike revealed Colin Kaepernick would be featured in its 30th anniversary "Just Do It" campaign.

In an interview with Fox News last year, Trump told Sean Hannity he thought Kaepernick should have been suspended after his first protest.

"I watched Colin Kaepernick, and I thought it was terrible, and then it got bigger and bigger and started mushrooming, and frankly the NFL should have suspended him for one game, and he would have never done it again," Trump told Hannity, to cheers from a live audience watching the interview. "I will tell you, you cannot disrespect our country, our flag, our anthem. You cannot do that."

Trump weighed in on the Nike campaign Tuesday, telling the Daily Caller that he thought Nike was sending "a terrible message" using Kaepernick in the ads. Still, he acknowledged the company's right to take a stance.

"As much as I disagree with the Colin Kaepernick endorsement, in another way ... it is what this country is all about, that you have certain freedoms to do things that other people think you shouldn't do, but I personally am on a different side of it," Trump told the Daily Caller.

In trading Tuesday, Nike shares closed down more than 3 percent.

Nike did not respond to a request for comment.

ESPN reporter Darren Rovell, who broke the news Monday, reported Nike's new "Just Do It" campaign would target 15- to 17-year-old teenagers and also include professional athletes Odell Beckham Jr., Shaquem Griffin, Lacey Baker, Serena Williams and LeBron James. Rovell tweeted Tuesday that the NFL did not respond to a request for comment on Nike's decision. In March, Nike and the NFL announced they had extended their longtime partnership for game apparel until 2028.

"We embrace the role and responsibility of everyone involved with this game to promote meaningful, positive change in our communities," NFL spokeswoman Jocelyn Moore said. "The social justice issues that Colin and other professional athletes have raised deserve our attention and action."

As The Washington Post's Mark Maske reported, Kaepernick last fall filed a grievance against the NFL, alleging multiple teams colluded to keep him out of the league because of his protests during the national anthem.

The irony of people discarding or defacing their Nike merchandise to protest something they disagreed with was not lost on those who supported Kaepernick and his protests. Many poked fun at the boycott, even filming satirical videos of themselves "destroying" their own Nike gear in ludicrous ways. Others vowed to wear their Nike apparel more frequently or to buy Nike gear to make up for the boycott attempt.

Companies are often pushed to respond to negative publicity or public pressure. But in Nike's case, the Kaepernick ad sends a proactive message on social and racial justice, said Anthony Johndrow, a corporate reputation adviser. The default is to shy away from campaigning on racial issues because companies fear that their own internal ranks may not "stand up to the scrutiny that will come if we take a stance on this," Johndrow said.

Johndrow said there is a perception that "you've got to keep your house in order first" and that companies "can't go proactive unless they're pristine." But Nike is charting another path, he said, not because the company lacks issues of its own but because it has historically engaged with hot-button issues in its advertising.

In 1995, for example, Nike looked to its "Just Do It" slogan to raise awareness of women's rights in sports. That same year, the company featured Los Angeles marathon runner Ric Munoz, who was HIV-positive.

Companies decide to take on issues based on how they define their mission, said Sonya Grier, a marketing professor at American University. With that comes the risk of losing those with different views. But that's an inevitable cost of taking on social justice causes, she said. It isn't always as complicated for a company to take a stance on issues like climate control.

Joe Holt, an expert on business ethics at the University of Notre Dame, said there is an important moral difference to companies promoting their views "because you have to" versus "because you want to." He said one true test of a company's values is if that company is willing to stick to them even at a financial cost. Nike's use of Kaepernick in the "Just Do It" ad seems to affirm that dedication, Holt said, because it will inevitably alienate some customers.

The Kaepernick ad is not only about racial justice, Holt said, but also tackles civil engagement. He pointed to a meeting between Kaepernick and Nate Boyer, a former Green Beret and football player, after Boyer wrote an open letter critical of Kaepernick's seated protest. Kaepernick invited him to talk.

Boyer explained that soldiers kneel at the graves of their fallen comrades out of respect. Kaepernick said he would kneel instead of taking a full seat to protest police brutality and the police-involved killings of unarmed black men.

"That is badly needed in our polarized society," Holt said. "For the most part, people on opposite sides of political questions are talking at each other but not to each other."