At 5 Times Speed Of Sound, Boeing's 2-Hour Dare From New York To London

Though still a preliminary design and without a name, Boeing said the aircraft could have military or civilian applications, but won't be in the sky for another 20 to 30 years. 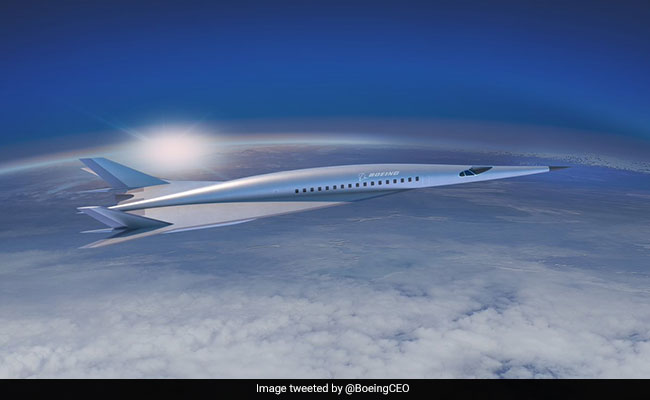 The company unveiled renderings of the proposed craft on Tuesday

Earlier this year, a Norwegian Air flight said one of its crews set a record time for the fastest-ever trans-Atlantic flight by a subsonic passenger aircraft.

The time: 5 hours and 13 minutes, besting the previous record, which was three minutes longer.

Not bad, but imagine boarding a plane in New York and arriving in London two hours later, about a 1.5 hours faster than the time it took the legendary Concorde to complete the same journey on average.

This week Boeing said it hopes to develop a passenger-carrying hypersonic airliner that would do exactly that, reaching speeds of Mach 5 - about 3,800 mph or roughly five times the speed of sound.

Though still a preliminary design and without a name, Boeing said the aircraft could have military or civilian applications, but won't be in the sky for another 20 to 30 years. The company unveiled renderings of the proposed craft Tuesday at the annual American Institute of Aeronautics and Astronautics conference in Atlanta.

"We're excited about the potential to connect the world faster than ever before," said Naveed Hussain, Boeing's vice president of aeromechanics. "Although technology and regulatory challenges are ahead, Boeing has been studying hypersonics for over six decades, which makes us the right company to bring this technology to market when the world is ready."

Outside of the Concorde's run between 1976 and 2003, supersonic travel has remained a largely elusive dream for commercial aviation, according to NBC News.

If achieved - and enough people were willing to pay for the pricey tickets - the rapid speeds could revolutionize world travel, experts say.

"It's been a dream for a while now," Stuart Craig, an assistant professor of aerospace and mechanical engineering at the University of Arizona, told NBC. "We've been striving for this hypersonic technology for the better part of half a century, but in recent years, advances in computational technology and materials technology have made it much more in grasp."

Supersonic air travel was a reality until 2003, when Concordes flying for British Airways and Air France were finally grounded, according to the BBC.

British Airways said the plane was retired because of "commercial reasons, with passenger revenue falling steadily against a backdrop of rising maintenance costs for the aircraft," the BBC reported.

Seven years earlier, a Concord made the trip between New York and London in two hours, 52 minutes and 59 seconds, setting a record that remains, according to Reuters' news archives.

Boeing said the this is just one of several hypersonic vehicle concepts the company is studying and the company looks "decades ahead at what could be possible."

Kevin Bowcutt - Boeing's senior technical fellow and chief scientist of hypersonics - told Wired the aircraft could be designed to travel at even faster rates of speed.

Promoted
Listen to the latest songs, only on JioSaavn.com
"This aircraft would allow you to fly across the ocean and back in one day, which is all most people would want," Bowcutt said. "So why go past those boundaries and complicate it?