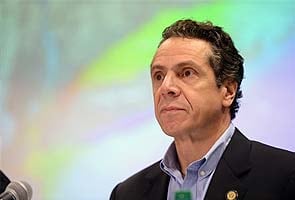 In this photo provided by the governor's office, New York Gov. Andrew Cuomo gives a storm updtate on the advancing Hurricane Sandy at the Nassau County Office of Emergency Management.

Director of Emergency Management Steven Kuhr was fired after the governor was told that Kuhr called a Suffolk County crew to remove a fallen tree from his driveway, according to the official. Kuhr was working in Albany at the time last week, shortly after Sandy hit.

The official spoke to The Associated Press on the condition of anonymity because the personnel decision wasn't announced. A spokesman for Cuomo declined to comment. The New York Times first reported the action.

Cuomo appointed Kuhr in October 2011 as executive deputy commissioner of the state Department of Homeland Security and Emergency Services.

There was no answer at Kuhr's office Wednesday night and a phone number listed in his name was not working.

The action comes as Cuomo has bitterly criticized utilities for what he said has been slow progress restoring power to customers from the Hudson Valley through Long Island. Most of the power has been restored to more than 2 million customers who lost electricity because of Sandy, though lights started flickering off again Wednesday night as a new storm raked the region.

Kuhr previously was president of Strategic Emergency Group, a consulting firm that had contracts with New York City, the state and the Port Authority of New York and New Jersey, according to the news release announcing his appointment. Kuhr had also worked for New York City for 20 years including with the fire department.
Comments
Sandy