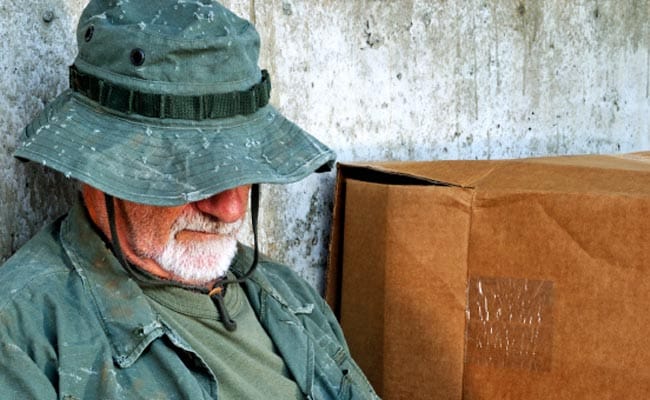 More than 4,600 veterans were classified as street homeless in the city four years ago, campaigners say the latest count was 800.

New York, United States: Four years ago Craig Hinds was homeless. A US Navy vet who served back-to-back tours in Iraq and Afghanistan, he had no job and was suffering from PTSD.

His life turned around when he moved into a PTSD-only housing unit in New York City. He is one of thousands who have been saved from living on the streets in a US push to end homelessness among ex military.

The homeless population may have soared to record highs but the city has seen a staggering reduction in the number of veterans who have no proper home.

Whereas more than 4,600 veterans were classified as street homeless in the city four years ago, campaigners say the latest count was 800.

Officials say more than 1,700 homeless veterans have been put in permanent housing since January 1, 2014.

It is a rare success story for a needy, vulnerable segment of the population in America's biggest city, its glitzy business capital that worships relentless wealth creation.

A massive injection of federal money, political will and the creation of more affordable housing mean that the Big Apple is on the cusp of eliminating homelessness among veterans.

Hinds served from 2005-2009 as a hospital corpsman, but was emotionally exhausted and missed his family, so left the military when his mother was diagnosed with cancer.

One in 10 are veterans

His military experience did not qualify him to work as a medical assistant in civilian life. He moved from Atlanta, Georgia, to New York, thinking it would be easier to get a job.

He initially stayed with his grandmother but she couldn't deal with his issues, so she kicked him out.

It was only after he moved into a studio in 2012 at the veterans-only building run by a non-profit that he started to recover.

Now 38 and a psychology major, he plans to work helping inmates in prisons after graduating next summer.

Figures for 2015 are scheduled to be released later this month.

The US government has since certified an end to veteran homelessness in cities such as New Orleans and Houston.

"There's just been a lot of momentum," says Tori Lyon, executive director of the Jericho Project, which provides housing for those in need. Hinds lives in one of their units.

The aim is to get veteran homelessness down to what Lyon calls a "functional zero" not that no veteran ever sleeps on the street but that the resources are in place to house any vet that needs it.

"The real bottom line is affordable housing units are so scarce," Lyon told AFP. Average, market-rate rent for a New York studio can range from $1,500 to $3,500 depending on neighborhood.

Leaving a structured environment, suffering from mental or physical injuries, lack of qualifications, lack of a family support and substance abuse are often factors.

Disabled veteran Gloria Montes, who served from 1979 to 1984, feels for soldiers returning from recent combat.

In 2013, she was evicted and forced to sleep in a car or on friends' floors until she found a place at a housing unit run by non-profit Urban Pathways.

"It was hard and I was only out for three-four months I can't imagine that veterans who are homeless are years," she said.

Her studio apartment, where she lives with her beloved dog Cache is stuffed with family photographs, baseball memorabilia and books.

"If I'm here, I have a bad day, a down day, whatever the case might be, flashbacks, got my neighbors and got the staff downstairs and my family for support," she said.

"If it wasn't for these people," she said. "I don't know how I would have made it. Really."
Comments
Craig HindsUS Navy vetPTSDBig AppleUS Navy VeteransObama administrationveteran Gloria Montes