The Banksy work, in the shadow of the town's dominant steelworks, shows a child seemingly playing in the snow, standing by a sled with his tongue out, tasting the falling snowflakes. 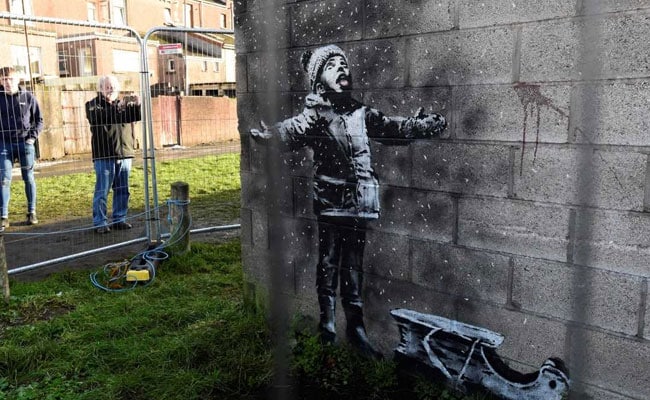 Banksy, the secretive British artist, claimed responsibility for the new artwork on Wednesday.(Reuters)

A new work by enigmatic street artist Banksy has got visitors flocking to the back of a car garage in Port Talbot, causing quite a stir in the South Wales steel town.

The image appeared on Tuesday. Since then the local authority has brought in two traffic wardens to manage the crowds packing out a narrow lane in a bid to see it.

The work, in the shadow of the town's dominant steelworks, shows a child seemingly playing in the snow, standing by a sled with his tongue out, tasting the falling snowflakes.

But round the corner of the garage, it shows smoke rising from a burning fire, and the snowflakes are actually falling ash.

"It's lovely because it brings over a number of messages," said local resident Kirstin Tucker.

"When you first look at it from this angle it just looks like there's a little child out there in the snow playing," she told AFP.

"But when you see the flames and the pollution that comes around from the other side of the picture, it brings out the thoughts of what Port Talbot was all about, the industrial side of things and the history."

Jason Nicholas Smart added: "I followed his art and looked into it. I think it's marvellous for Port Talbot that he's actually come down here and done something for the local community. Strong social statement."

The garage is owned by Ivan Lewis, 55, a steelworker at the town's Tata Steel plant. 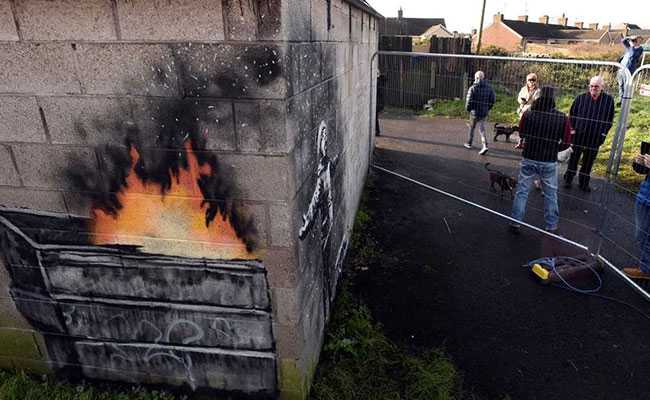 This was Banksy's first work in Wales (Reuters)

"It started off as fun, but now it's gone to stress. It's down to not sleeping, but now I've got the security there it's taken that weight off me," he said.

"I've never experienced anything like this. My phone is ringing, on my house phone there's 1,000 messages on it."

The father of one said he has not decided what to do with the artwork, and denied receiving any offers to sell it.

"I'm really just rolling with it at the moment and I don't know where it's going," he said.

The work is Banksy's first in Wales and is taken by some to be a comment on Port Talbot's industrial heritage and pollution linked to its steel plant.

The traffic wardens will stay in place over the Christmas and New Year holidays.

Port Talbot resident Anne-Marie Hutchinson said: "To have this unique opportunity to bring people from far and wide, I think they come in from all over the world is brilliant for us."

Artistic jaws dropped in October after Banksy's audacious prank involving the shredding of his "Girl With Balloon", moments after it fetched £1,042,000 ($1.4 million, 1.2 million euros) a joint record for the maverick, who had hidden a shredder in the frame.

Experts said that stunt only added to the value of the work.

(Except for the headline, this story has not been edited by NDTV staff and is published from a syndicated feed.)
Comments
United KindomBanksySouth Wales