New Armoured Dinosaur Found In US Evolved From Asian Ancestors

The new species of ankylosaurid dinosaur Akainacephalus johnsoni lived about 76 million years ago on a lost continent named Laramidia, according to the study published in the journal Peer. 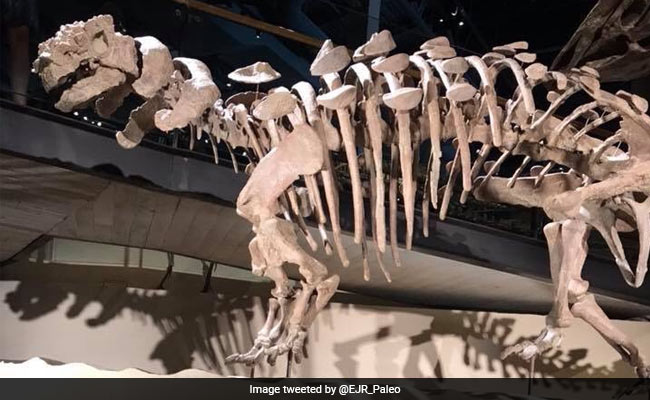 The new species Akainacephalus lived during the Late Cretaceous Period

The features of a new species of armoured dinosaur discovered in the US align more closely with its Asian ancestors, says a new study.

The new species of ankylosaurid dinosaur Akainacephalus johnsoni lived about 76 million years ago on a lost continent named Laramidia, according to the study published in the journal Peer.

"It is always exciting to name a new fossil taxon, but it is equally exciting if that taxon also provides additional insights into the bigger picture of its life, such as its diet or aspects of its behaviour, and the environment it lived in," said lead author Jelle Wiersma from the University of Utah in the US.

"Such is exactly the case with Akainacephalus johnsoni; not only is this the first described and named Late Cretaceous ankylosaurid dinosaur from Utah, but this unique animal also strengthens the evidence that distinct northern and southern provincialism existed during the late Campanian stage in Laramidia," he said.

The new species Akainacephalus lived during the Late Cretaceous Period and offers the most complete skeleton of an ankylosaurid dinosaur found in the southwestern US.

It includes a complete skull, much of the vertebral column, including a complete tail club, several fore and hind limbs elements, and bony body armour that includes two neck rings and spiked armour plates.

The researchers determined that Akainacephalus was a medium-sized dinosaur, and was four to five metres long and was one to 1.5 metres tall at the hips.

The new research indicates that the defining features of Akainacephalus, specifically the spiky bony armour covering the skull and snout, align more closely with Asian ankylosaurids, who also have more pronounced spikes covering their skulls.

Akainacephalus once roamed the southern part of Laramidia, a landmass on the western coast of a shallow sea that flooded the central region, splitting the continent of North America in two.

This caused isolation along the western and eastern portions of the North American continent during the Late Cretaceous Period, between 95-70 million years ago, according to the study.

This lowering of sea levels exposed the Beringian land bridge, allowing dinosaurs and other animals to move between Asia and North America.

The fossil of the dinosaur is now on display at the Past Worlds Gallery of the Natural History Museum of Utah at the Rio Tinto Center in Salt Lake City, Utah.

(This story has not been edited by NDTV staff and is auto-generated from a syndicated feed.)
Comments
DinosaurNew Species found