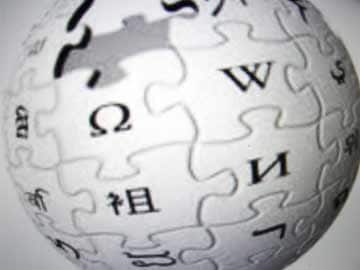 Wikipedia is a global crowd-sourced encyclopedia and some of the information appearing on it is put there by bots rather than human beings.

Washington: Researchers have created an application that monitors how much of Wikipedia entries are being created or edited by bots - software applications that run automated tasks over the Internet - and humans.

Wikipedia is a global crowd-sourced encyclopedia and some of the information appearing on it is put there by bots rather than human beings.

To keep entries coming and to keep them updated, bots have been created to grab information from one place and post them into another.

It is not easy to determine what portion of Wiki pages are generated by humans versus bots.

So Thomas Steiner, a Customer Solutions Engineer at Google Germany, Hamburg and colleagues have created an application that can be accessed and used by anyone to see in real time what percentage of pages are being written by humans, versus bots.

The application reveals that bots are doing a lot more of the work adding information to pages in non-English speaking countries, which suggests that the majority of Wikipedia content is still being created by human beings in the US and the UK, 'phys.org' reported.

The application also monitors activity on Wikidata, a database to share data among the difference language versions of Wikipedia.

Promoted
Listen to the latest songs, only on JioSaavn.com
"We have developed an application and an underlying Application Programming Interface (API) capable of monitoring realtime edit activity of all language versions of Wikipedia and Wikidata,"  researchers said.

"This application allows us to easily analyse edits in order to answer questions such as "Bots vs Wikipedians, who edits more?", "Which is the most anonymously edited Wikipedia?", or "Who are the bots and what do they edit?" they said.