Nepal: Prachanda fails to get majority in PM run-off poll 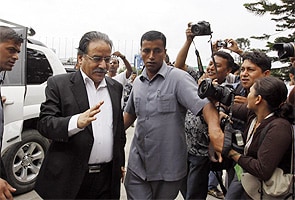 Kathmandu: Uncertainty loomed over Nepal as Maoist supremo Prachanda and his Nepali Congress rival Ramchandra Poudyal failed to win a clear majority in the third round of run-off vote in Parliament on Monday to elect a new prime minister, deepening the political crisis in the country.

In his third attempt to become the new Prime Minister, Prachanda failed to get majority support as he managed only 259 votes in 601-member parliament.

The Constituent Assembly, which also serves as the interim parliament, also failed to elect Poudyal who received 124 votes in his favour and 246 against.

During the voting today, which was delayed due to last minute negotiations among the parties, 186 lawmakers remained neutral and abstained from voting.

As the votes secured by Prachanda was less than 50 per cent of the total voters, his candidacy was rejected, Subhash Nemwang, chairman of the Constituent Assembly, said.

He could not secure the required 50 per cent plus votes necessary to get elected.

The Parliament has been adjourned with the Work Management Committee of the Parliament set to decide on the next meeting to elect the prime minister.
Comments
Nepal pollPrachandaRamchandra PoudyalPM run-off poll