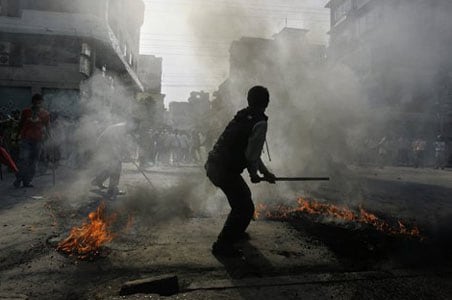 Supporters of Nepal's opposition political parties, who are against PM Pushpa Kamal Dahal's decision to fire army chief Rookmangud Katawal, set fire on old tires and block roads during a protest in Katmandu on May 3, 2009. (AP)

Nepal plunged into turmoil with the Maoist-led government and the military locked in a major confrontation after Prime Minister Prachanda sacked Army chief General Rukmanga Katawal today for allegedly defying government orders but the General refused to step down.

CPN(UML), a key ruling coalition partner, also decided to withdraw its support to the government  in an immediate political fallout of Prachanda's action which triggered protests from most political parties in the ruling coalition.

President Ram Baran Yadav also refused to accept Prachanda's decision instead asking him  to follow constitutional provisions and seek consensus of other political parties before taking a decision on the 61-year-old army chief.

It was unclear, however, if the prime minister has the power to unilaterally fire the military chief which came despite domestic and international calls against such a move, including from India who favoured a rapprochement.

"The army chief was removed because he failed to give satisfactory explanation on why the government orders were ignored," Information Minister Krishna Bahadur Mahara told reporters shortly after the decision was taken at a special cabinet meeting chaired by Prachanda and boycotted by four key constituents of the coalition government.

Lt General Kul Bahadur Khadka, the number two in the army and a confidant of Prachanda, was immediately named as acting army chief to replace General Katawal, who was to retire after three months. General Katawal, however, declined to step down, according to media reports.

President Yadav in a letter to Prachanda asked him to forge a consensus among political parties while taking a decision regarding the unilateral scking of army chief, according to the President press advisor Rajendra Dahal. The president is the supreme commander of the army.

In effect the ball is now in the court of President Yadav, who as the head of state, has the final authority to remove the army chief. Yadav also reminded the Prime Minister that the decision made by the government, which is in a minority cannot be implemented.

The main opposition party Nepali Congress rejected the sacking of the army chief and asked the government not to implement the decision. It also warned of street protests.

In a significant development, the CPN-UMLs standing committee meeting decided to withdraw support to the government and called back all its members from the cabinet headed by Prachanda, according to the party office sources.

The decision to pull out from the government by the CPN-UML, whose support is crucial for the Maoist governments survival, has deepened the political crisis with the survival of the coalition in doubt. The UML, with 207 members in the 601 member constituent assembly, is the third largest party.

The Maoists' move came a fortnight after they served an ultimatum to General Katawal, seeking his clarification on recruitments by military, its "hastiness" in reinstating eight generals retired by the government and its decision not to participate in the National Games.

He had furnished his reply contending that he had not disobeyed the government's directives on removing eight generals and halting recruitment in the military.

Following the government's decision to fire him, a defiant General Katawal rejected it saying the Prime Minister had no authority to remove him, according to a private radio.