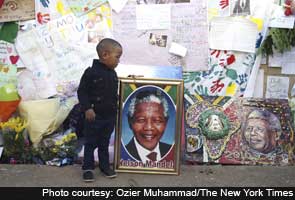 Johannesburg: A grave-digging dispute has added to the bitter family feuding, over sex, money and power, among Nelson Mandela's heirs which has set South Africans on edge as the anti-apartheid icon lies critically ill in hospital.

The Nobel peace laureate is famous the world over for spending 27 years in jail and then reconciling with his white oppressors after he became the nation's first black president.

But as the 94-year-old Mandela fights for his life, a legal battle among feuding relatives over his eventual resting place has descended into a messy public soap opera.

The family said the 39-year-old Mandla, who is the clan's traditional chief had moved the remains from Mandela's childhood home in 2011 without the consent of the rest of the family.

Shortly before the remains were re-buried, Mandla, in a nationally televised news conference Thursday, launched a tirade against the rest of the family. He accused his aunt, the anti-apartheid hero's daughter Makaziwe, of trying to "sow divisions and destruction".

After saying he wouldn't air the family's "dirty linen" in public, Mandla went on to say his brother Mbuso had "impregnated my wife". He also said his two other brothers were born out of wedlock.

The dispute has earned the Mandelas the doubtful accolade of being seen as South Africa's Ewings, a comparison with US soap opera Dallas which recounts a wealthy Texas family's intrigues and conspiracies.

"Mandla Mandela has become the veritable JR Ewing of the Mandela family," internet website Daily Maverick wrote, comparing him to the show's anti-hero.

The grave dispute touches on Mandela's own eventual resting place. In the past he had said he wanted to be buried in Qunu, his rural childhood village and retirement home in the country's rolling southern hills.

His family argued Mandla wanted to change Mandela's gravesite to Mvezo and so moved the children's remains to stake his claim for a new burial site.

South Africans have reacted with shock at their disagreements.

"The public is trying to give them space to run their affairs but they are busy displaying their dirty linen for all to see," wrote Michael Mokoena in a letter local daily The Times.

"I should think they can come together and try to resolve this matter and not take each other to court," a woman named Johanna told AFP.

The tiff has also elicited comments from the country's moral compass and another Nobel peace laureate, Desmond Tutu.

"Please, please, please may we think not only of ourselves. It's almost like spitting in Madiba's face," Tutu pleaded in a statement, referring to Mandela by his clan name.

Presidential spokesman Mac Maharaj called the dispute "regrettable" and urged the Mandela damily to resolve their differences "as amicably and as soon as possible".

But the scandal does not stop there.

Mandla, 39, has had two traditional marriages interdicted by his estranged first wife, and is locked in land dispute with his neighbours.

He has also disappointed in parliament, where he serves under the ruling African National Congress, the movement his grandfather led.

Another lawmaker, Mandela's ex-wife Winnie Madikizela-Mandela, was convicted of kidnapping a youth in 1980 who her bodyguards later killed.

The Mandela family, which includes the anti-apartheid hero's three daughters, 17 grand-children and 12 great-grandchildren, avoided the media spotlight during his political career.

But after his last public appearance in 2010 some seemed to find their family name's value irresistible.

While Mandela always strictly limited commercial use of his name to charities, four of his grandchildren in 2010 set up the clothing brand LWTF Clothing, acronym for their grand father's famous autobiography Long Walk to Freedom.

The line's t-shirts liberally display his signature and photo.

His eldest child Makaziwe and her daughter Tukwini later launched the "House of Mandela" wine label.

In another episode that jars with the global peace icon's image, two other granddaughters recounted their high-society life in a reality television show, dubbed "Being Mandela".

Zenani and her half-sister Makaziwe made headlines this year trying to remove three directors Mandela appointed to the trust fund that holds the family fortune.

At stake is the $1.7 million the global icon has made through royalties of his autobiography and art works carrying his hand prints and prison number, 46664.

Promoted
Listen to the latest songs, only on JioSaavn.com
The sisters accused the trustees, including respected lawyer George Bizos -- a close friend who defended Mandela in the case that sent him to prison -- of interfering in family affairs.

The three trustees for their part told the court Mandela didn't want his daughters to manage his affairs.