Nelson Mandela battles for life as well-wishers pray for recovery 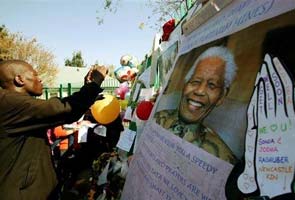 Pretoria: South Africa's former President Nelson Mandela's condition remains "critical but stable" on the 23rd day of his hospitalisation for a recurring lung ailment, even as a stream of people continued to flock the hospital to pray for the recovery of the 94-year-old former president.

Well-wishers were singing and saying prayers outside the Mediclinic Heart Hospital in Pretoria and at Soweto, the former home of Mandela.

There was no official word today on the medical condition of the country's first black president, who spent 27 years behind bars fighting the minority apartheid regime to establish the multiracial democracy.

"These are very excellent doctors who are dealing with him," Zuma had said. "We hope that very soon he will be out of hospital."

Limpopo traditional leader Queen Sekgopo said she was in Pretoria to pray for Mandela, who was admitted to the hospital with a recurring lung infection on June 8.

"I am here to pray for Madiba, to wish him well and to pray that God will keep him safe for us," she said using Mandela's clan name.

Gawie and Petra du Preez brought their seven-year-old daughter Michelle and her six-year-old friend Minke Myburg to drop off flowers and cards at the hospital.

Michelle and Minke shyly said: "We love you Madiba." Six-year-old Jeane Lotter proudly said she had made a card for Mandela and pasted stickers on it to show her love.

"I am here because Mandela is sick. He loves everyone and children," she said, quoted by SAPA news agency.

In the street, vendors were selling everything from food to Mandela merchandise.

Mandela, who turns 95 on July 18, respected across the globe as a symbol of resistance against injustice.

Mandela had a long history of lung problems, dating back to the time when he was a political prisoner on Robben Island during apartheid. While in jail he contracted tuberculosis.

Mandela is revered for leading the fight against white minority rule in the African country and then preaching reconciliation despite being imprisoned for 27 years.

Mandela served as the country's president from 1994 to 1999. He left power after five years as president.

Promoted
Listen to the latest songs, only on JioSaavn.com
Mandela was awarded the Nobel Peace Prize in 1993. He retired from public life in 2004 and has not been seen in public since the football World Cup finals in in 2010.