The needles, originally found in strawberries produced from one supplier in the northern state of Queensland, are now turning up around the country. 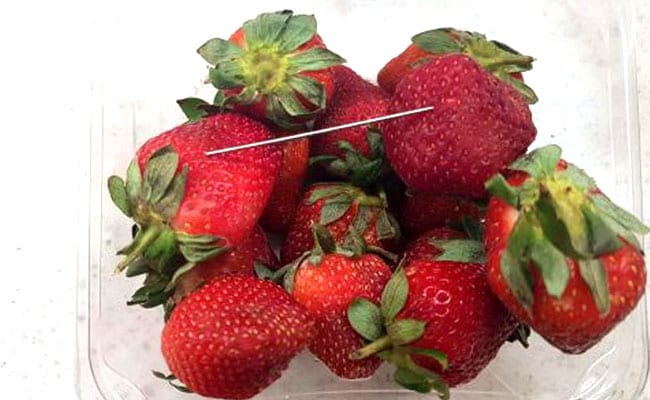 Australian police said on Tuesday they are investigating reports of dozens of cases of needles embedded in strawberries and other fruits, and warned that those responsible could be jailed for 10 years.

The issue is fast turning into one of Australia's biggest ever food scares that has halted exports to New Zealand and forced at least one strawberry farm to start dumping its fruit at the peak of the season. Another farm is installing metal detectors, media reported.

The needles, originally found in strawberries produced from one supplier in the northern state of Queensland, are now turning up around the country.

Police in New South Wales (NSW) state said on Tuesday needles had been found in more than 20 strawberry punnets, and there were reports that a banana and apple also had needles in them.

Police in other states are also investigating reports of similar sabotage, though they have not given details on the number of complaints.

"Any incidents of self-contamination or copycat incidents impact on the industry and are very unhelpful for authorities," NSW Detective Superintendent Danny Doherty told reporters in Sydney.

"They will be treated as contamination, which is a serious offence and carries 10 years in jail."

One person has told media he suffered minor injuries to his mouth after biting on a strawberry with a needle embedded in it.

Previous contamination cases in Australia have led to arrests, but not convictions.

In 2000, a man was accused of lacing paracetamol tablets with strychnine, prompting the tablets to be recalled nationwide. The suspect died in jail before being tried.

In 2006, a case against a woman accused of contaminating salads at Sizzler restaurants with rat poison was deemed mentally unfit for trial.

The strawberry industry is worth A$160 million ($115 million), according to the sector, with most of the fruit consumed locally. A small amount of the crop is also consumed in New Zealand.

Both of New Zealand's biggest supermarket have halted Australian strawberry orders even though New Zealand's Ministry of Primary Industries has confirmed none of the contaminated strawberry brands has made it on to shop shelves.

Australian police said on Tuesday they had yet to identify a suspect or a motive.

While six brands have been directly affected and withdrawn from sale, consumers have begun to shun the fruit altogether.

Queensland state, the country's largest strawberry producing region, is particularly vulnerable to a sustained downturn in the market.

Its premier, Annastacia Palaszczuk, said on Tuesday the government would set aside A$1 million to help farmers survive the season. The state government is offering a A$100,000 ($71,950) reward for information leading to the arrest of those responsible for the sabotage.

(Except for the headline, this story has not been edited by NDTV staff and is published from a syndicated feed.)
Comments
Needles In StrawberriesAustralia Strawberry ScareStrawberries