Evacuees have packed into temporary shelters or moved in with relatives. 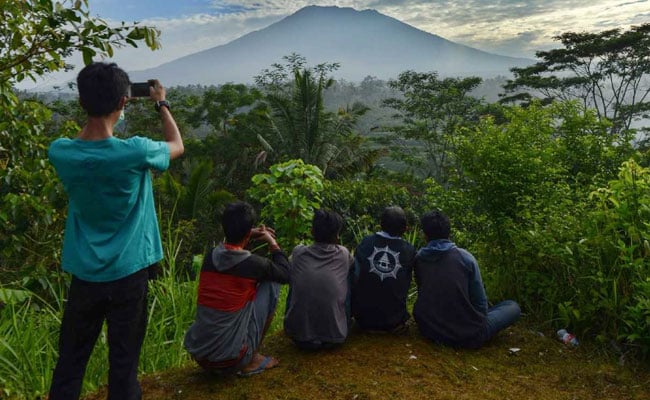 Karangasem, Indonesia: Nearly 50,000 people have evacuated their homes amid fears of an imminent volcanic eruption on the Indonesian resort island of Bali, disaster officials said Monday.

Mount Agung, about 75 kilometres (47 miles) from the tourist hub of Kuta, has been rumbling since August, threatening to erupt for the first time in more than 50 years.

Indonesia's disaster mitigation agency said Monday 48,540 people had fled, although the number was expected to rise because more than 60,000 people lived in the danger zone.

"There are still people who don't want to be evacuated," Sutopo Purwo Nugroho, a spokesman for the disaster mitigation agency, said at a press conference.

"The reason is firstly, the mountain hasn't erupted yet. Secondly, they are worried about their livestock."

Officials announced the highest possible alert level on Friday following the increasing volcanic activity, and told people to stay at least nine kilometres away from the crater.

Evacuees have packed into temporary shelters or moved in with relatives.

Some 2,000 cows have been also evacuated from the flanks of the volcano.

Nengah Satiya, who left home with his wife three days ago, said he had been returning to the danger zone to tend to his pigs and chickens.

"There are many livestock in our village but nobody is taking them," Nengah Satiya told AFP. "We take turns going back to feed them."

The airport in Bali's capital Denpasar, through which millions of foreign tourists pass every year, has not been affected.

Promoted
Listen to the latest songs, only on JioSaavn.com
More than 1,000 people died when Mount Agung last erupted in 1963.

(This story has not been edited by NDTV staff and is auto-generated from a syndicated feed.)
Comments
Mount AgungBali Volcanic Eruption