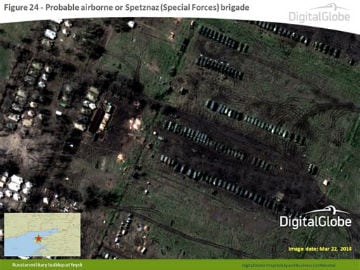 This satellite image made by DigitalGlobe on March 22, 2014, and provided by NATO on April 9, 2014, shows what is purported to be a Russian military airborne brigade at Yeysk, near the Sea of Azov in southern Russia.

Mons, Belgium: NATO presented satellite photographs on Thursday it said showed Russian deployments of 40,000 troops near the Ukrainian frontier along with tanks, armoured vehicles, artillery and aircraft ready for action.

"This is a force that is very capable, at high readiness, and, as we have illustrated through the imagery, is close to routes and lines of communication," British Brigadier Gary Deakin said at a briefing at NATO military headquarters at Mons in southern Belgium.

"It has the resources to be able to move quickly into Ukraine if it was ordered to do so," he said.

If Russian political leaders took a decision to send forces into Ukraine, the first Russian forces could be on the move within 12 hours.

NATO has spotted Russian forces at more than 100 different sites close to the Ukraine border, he said.

The Western alliance showed the pictures supplied by commercial satellite imagery firm DigitalGlobe to bolster its warnings of a Russian military buildup that could threaten Ukraine.

A Russian official, quoted by a state-run news agency, said the photographs were from August last year. Russia has denied massing forces near the border and accuses NATO of fomenting concern to rally support for the alliance.

NATO foreign ministers asked military planners last week to draw up a range of options for bolstering NATO forces in central and eastern European allies nervous about Russian intentions after its occupation and annexation of Ukraine's Crimea.

Those options have now been delivered to NATO headquarters and NATO ambassadors are expected to take decisions based on them "within a week to two weeks," Deakin said.

He ruled out the alliance sending forces to non-NATO member Ukraine, however.

"I wouldn't envisage us deploying troops in Ukraine, that's not in our thinking," he said.

A Pentagon spokesperson said the destroyer USS Donald Cook arrived in the Black Sea on Thursday for exercises. The U.S. vessel is expected to be working with ships from Romania, Bulgaria and Turkey.

Many of the sites in the satellite images appeared to be fields rather than established bases. The sites were located between about 20 km (12 miles) and 150 km of the Ukraine border, according to images that NATO said were taken between March 22 and April 2.

Russian troop numbers had remained at about the same level since then, Deakin said.

"These photographs that were distributed by NATO depict units of Russian forces of the Southern Military District which conducted various exercises last summer, some of them near the border with Ukraine," RIA quoted what it said was a high-level official in the Russian general staff as saying.

A NATO official responded that the images were from March and April this year and each image showed the date it was taken.

Several images dated March 26 and taken around the Russian town of Belgorod, 40 km from the Ukraine border, showed units of a motorised rifle regiment, Mil Mi-8 and Mi-24 helicopters, tanks and infantry fighting vehicles, supply and transport vehicles, according to NATO.

Other satellite pictures, dated March 27 and taken near Novocherkassk, showed units of a motorised rifle regiment, a "probable" anti-tank battalion and artillery.

Promoted
Listen to the latest songs, only on JioSaavn.com
More images, dated March 22 and taken near the port of Yeysk, just 20 km from Ukrainian airspace, showed four Su-33 fighter aircraft and an airborne early warning plane, while other pictures, dated April 2, showed Su-27, Su-30, Su-24 and MiG-31 warplanes at the formerly vacant Buturlinovka air base, 150 km from the Ukraine border, according to NATO.