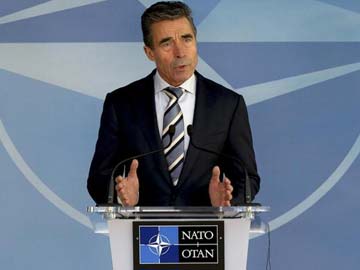 Paris: NATO's chief warned Russia on Tuesday that it would be committing a "historic mistake" if it intervened further in Ukraine, urging Moscow to "step back" after pro-Kremlin militants seized government buildings in several cities in the east.

"I urge Russia to step back and not escalate the situation in east Ukraine," he said at a Paris seminar.

"If Russia were to intervene further in Ukraine it would be a historic mistake. It would have grave consequences for our relationship with Russia and it would further isolate Russia internationally."

Pro-Russia activists have seized state buildings in the eastern cities of Kharkiv, Lugansk and Donetsk, where they have vowed to vote on joining Russia in an eery echo of last month's situation in Crimea, a Black Sea peninsula that has since been annexed by Moscow.

Kiev has accused Russia of fomenting the unrest and Washington warned the Kremlin to stop efforts to "destabilize Ukraine," accusations that Moscow brushed off.

Promoted
Listen to the latest songs, only on JioSaavn.com
Russia instead warned Kiev on Tuesday against any use of force in Ukraine's east, which it said could tip the country into civil war.

Twitter Imposes More Restrictions, Warning Labels Ahead Of US Elections