When the image was captured, the ISS was moving at a speed of roughly five miles (eight km) per second. 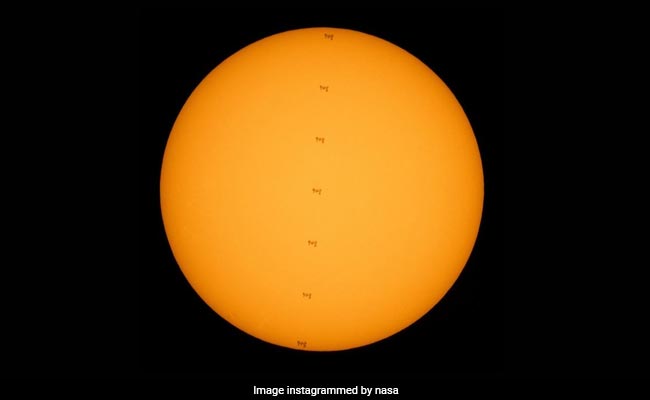 The ISS is seen in silhouette against the yellow-orange background of the unbelievably large Sun.

NASA shared a captivating image of the International Space Station (ISS) transiting the Sun when two astronauts were out on a spacewalk on Friday. The ISS is seen in silhouette, like a very small object, against the yellow-orange background of the unbelievably large Sun. NASA captured the ISS at seven different points of time and created a composite image. The American space agency said the ISS was moving at a speed of roughly five miles (eight km) per second about 410 kilometers above Earth.

NASA said the image was captured from a location near Virginia and explained the term “transit” is used to describe the event when an object crosses in front of another in space. At the time of this transit, astronauts Shane Kimbrough and Thomas Pesquet were working to install a new roll-out solar array on the ISS. The spacewalk lasted for six hours and 45 minutes.

The image has got more than 6 lakh likes. Stunned by its beauty, several Instagram users shared their excitement.

“Looks very interesting and extraordinary,” said a person with the username “blue_ofthesky”.

Another user, who goes by the name John Epiceno, said, “Five miles per sec. Jeez! I'm impressed. Speed is so fascinating”.

NASA shared another stunner on its Instagram account that showed the Sun's glint beaming off the Indian Ocean as the ISS orbited over western Australia.

NASA said the Sun is a yellow dwarf star and lies at the heart of the solar system, where it is by far the largest object. In the caption, it also asked its followers how many Earths could fit inside the Sun? It gave them four options. And all of them can make us rethink our estimate of the Sun's size.

A user, Ariana Martiall, said, “Hey NASA.. That was amazing”.

An overwhelmed person, Stella, wrote “So stoked to call this Home”.