Can You Spot The Astronaut? Watch NASA's Stunning View 410 Km Above

Astronauts left the International Space Station Friday for power upgradation work, and were greeted by the breathtaking view of the Earth in the backdrop. 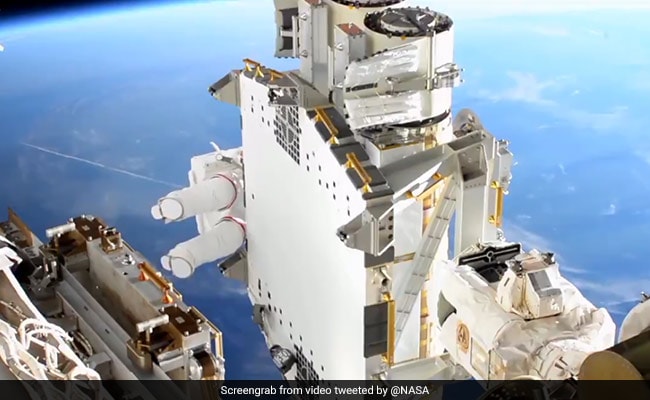 Two astronauts on the International Space Station undertook a spacewalk Friday to continue with the installation work of the new, roll-up solar arrays, to upgrade the power supply on the ISS.

Thomas Pesquet of the European Space Agency (ESA) and National Aeronautics and Space Administration (NASA) astronaut Shane Kimbrough undertook the spacewalk about 410 kilometres above Earth, said the US space agency.

"How about that view? 255 miles (410 kilometers) above Earth, @Thom_Astro (suit with red stripes) and @Astro_Kimbrough continue making progress upgrading the @Space_Station's power supply," NASA tweeted with a video of the spacewalk.

The video caught a glimpse of astronaut Pesquet during his spacewalk, with the breathtaking view of the Earth in the backdrop. It was streamed live.

The astronauts were out of the ISS to install the second of the six roll-out solar arrays, which arrived on a SpaceX Dragon cargo ship on June 5, according to NASA quoted by space.com. The first one was installed earlier this week.

The solar arrays, installed during the 2000-2009 period, are "showing signs of degradations", though they are "functioning well", the US space agency had said in January, adding that they are designed for 15-year service life. Space.com said the new arrays on ISS will increase its power levels to 215 kilowatts, compared to existing 160 kilowatts.