The landing came with Russian and US officials investigating the appearance of a mysterious hole in a Russian space craft docked at the orbiting station. 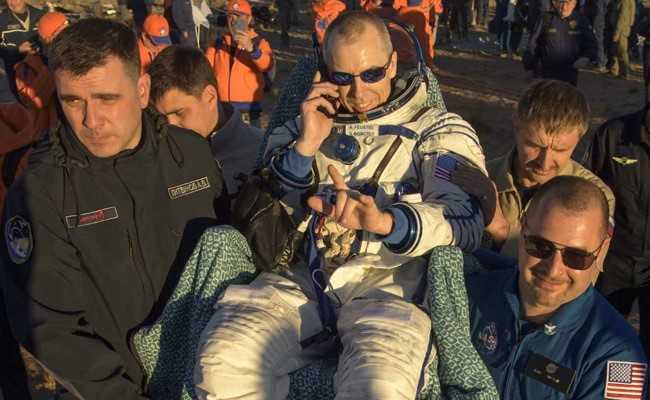 Two American astronauts and a Russian cosmonaut returned to Earth on Thursday wrapping up a six-month mission at the International Space Station as tensions between Washington and Moscow threaten a rare area of cooperation.

NASA astronauts Drew Feustel and Ricky Arnold and Oleg Artemyev of Roscosmos touched down on steppe land southeast of the Kazakh town of Dzhezkazgan at the expected time of 1145 GMT.

The landing came with Russian and US officials investigating the appearance of a mysterious hole in a Russian space craft docked at the orbiting station.

Detected in August, the hole caused an air leak on the ISS but was quickly sealed up.

This week the outspoken chief of the Russian space agency, Dmitry Rogozin, said investigators believed the small hole had been made deliberately and was not a manufacturing defect.

The official, who was placed under US sanctions over the Ukraine crisis in 2014, also bemoaned "problems" in the Russian space agency's cooperation with NASA that he attributed to interference from unnamed American officials. 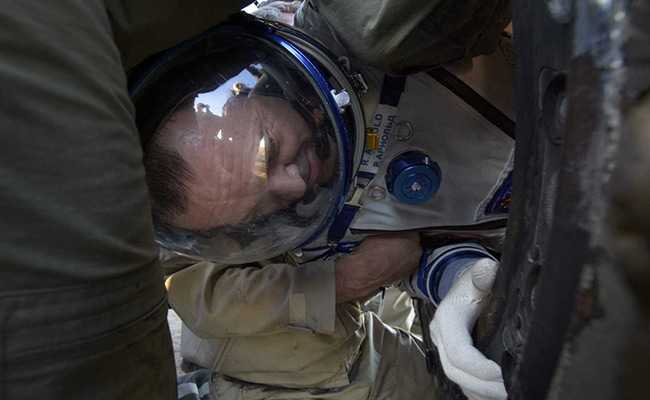 NASA astronaut Richard Arnold being helped out of the spacecraft, just minutes after the landing

Last month the Russian daily Kommersant reported that an investigation had probed the possibility that US astronauts deliberately drilled the hole in order to get a sick colleague sent back home -- something Russian officials later denied.

ISS commander Feustel has called the suggestion that the crew was somehow involved "embarrassing" and NASA on Wednesday expressed doubts over the theory that the hole was the result of sabotage.

The US space agency said that ruling out defects "does not necessarily mean the hole was created intentionally or with mal-intent."

ISS astronauts are planning a spacewalk in November to gather more information on the hole.

The ISS is one of the few areas of tight Russia-US cooperation that had until now remained unaffected by the slump in ties, including after Washington's sanctions against Russia over Ukraine and other crises.

The next launch from the Baikonur Cosmodrome in Kazakhstan is scheduled for next Thursday.

The crew was all smiles on return to Earth, with Artemyev first out of the descent module and shown tucking into a fruit and vegetable feast that included a giant cantaloupe melon in footage broadcast by Roscosmos.

He also wrote "spasibo" (thank you) and signed his name on the craft in chalk.

"I have had my 'glory days in the hot sun' and now it's time to come home," he wrote late Wednesday in a tweet that included a photo of the sun taken from the ISS.

While he was on his third mission in space, 47-year-old Artemyev and 54-year-old Arnold had previously only served on one mission each.

Their journey that began with a blastoff from Baikonur in March was particularly poignant for Arnold, who during his debut mission in 2009 helped build the space station he has now spent 197 days living in.

While aboard the ISS, Arnold, who has a teaching background, gave lessons on space that Sharon Christa McAuliffe -- one of seven crew members killed in the Space Shuttle Challenger accident in 1986 -- had originally been supposed to teach.

In a NASA video, Arnold revealed that fellow educator McAuliffe's death in an explosion just over a minute after the challenger crew blasted off was one of the things that prompted him to take up teaching.

"To me and for our nation it was really important (those lessons) weren't lost," he said.

(Except for the headline, this story has not been edited by NDTV staff and is published from a syndicated feed.)
Comments
US astronautsUS astronauts land