NASA Administrator made the announcement as he toured the California headquarters of billionaire Elon Musk's SpaceX, a major contractor for NASA. 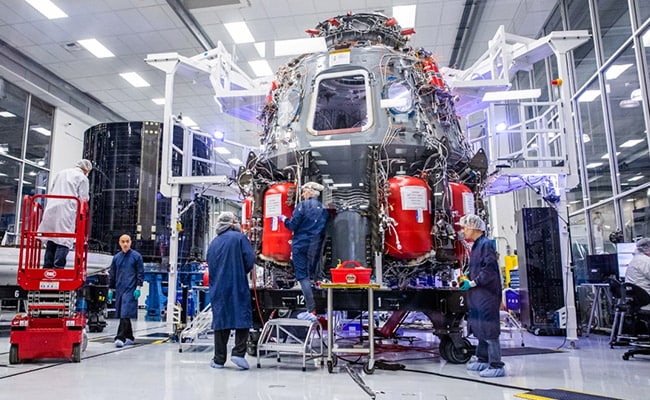 SpaceX could launch US astronauts to the International Space Station as early as next year if tests on the company's long-delayed Crew Dragon capsule prove conclusive, NASA Administrator Jim Bridenstine said Thursday.

Bridenstine made the announcement as he toured the California headquarters of billionaire Elon Musk's SpaceX, a major contractor for NASA.

The visit came as Bridenstine and Musk have been engaged in a public spat over the much-delayed building of the Crew Dragon spacecraft.

The capsule would provide the transportation for astronauts to the space station for the first time since America's space shuttle program ended in 2011.

Musk, who appeared at a news conference alongside Bridenstine and the two astronauts who are set to fly on board the spacecraft, said he hoped to have the capsule delivered to NASA by the end of the year.

He stressed, however, that safety was paramount and the launch would be delayed without hesitation if any problems arise.

"If everything goes according to plan, it would be in the first quarter of next year," Bridenstine said of the launch. "But remember -- and this is the important thing that we have to get right on messaging -- there are still things that we can learn or could learn that could be challenging that we have to resolve.

"I'm not saying that's going to happen, I don't know. That's why we test."

Some of the technical challenges SpaceX is working on include concerns about the parachutes and the propulsion system.

"It's a pretty arduous engineering job to get the parachutes right," Musk said.

"Parachutes, they look easy but they are definitely not easy," he added. "We want to get at least something on the order of 10 successful tests in a row before launching astronauts."

Since retiring its space shuttle program, NASA has had to rely on Russia to ferry astronauts to and from the space station at a cost of $85 million a seat. It is now counting on SpaceX and Boeing to carry out that task.

SpaceX was founded in 2002 by Musk to help reduce space transportation costs -- and with an ultimate goal of helping colonize Mars.

The first manned flight to the space station was due to take place last year but SpaceX suffered a major setback in April when its Crew Dragon spacecraft exploded during testing, prompting delays and renewed tests.