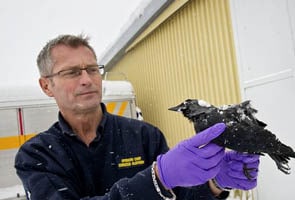 Stockholm: Officials say about 50 birds have been found dead on a street in Sweden.

Veterinarian Robert ter Horst says the cause of jackdaws' deaths was unclear but that fireworks were set off near the scene on Tuesday night.

The birds were found dead on Wednesday.

Ter Horst says cold weather, difficulties finding food and possible shock from the fireworks could be responsible, leading to the stressed birds either dying from the stress or being run over by vehicles.

Five of the dead jackdaws found in the city of Falkoping were being tested.

In the US, New Year's Eve fireworks were blamed in Arkansas for killing thousands of blackbirds, and a few days later power lines likely killed about 450 birds in Louisiana.
Comments
Bird killsweden bird deathbirds dying