"My Second Family": French Protesters Band Together For Christmas

"The thing which brings us all together is that we're sick and tired of struggling," Alexandre, a 38-year-old labourer, said at the roundabout in Somain. 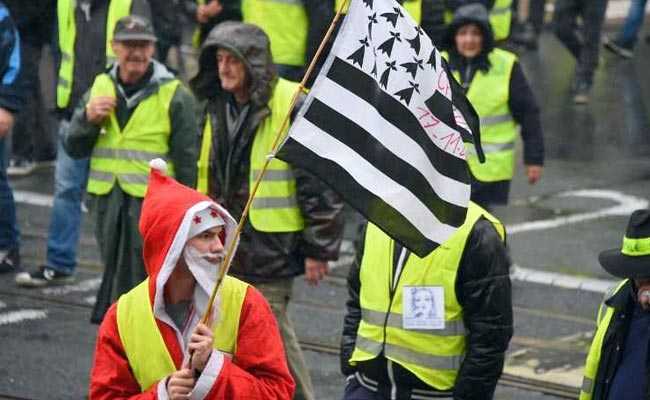 Protesters says their movement has fostered a newfound sense of community and solidarity.(file)

The protests against President Emmanuel Macron may have eased in the run-up to Christmas, but dozens of demonstrators camped out at roundabouts across France are vowing to keep up the pressure, with no plans to head home for the holidays.

Devilled eggs, foie gras and a traditional buche de Noel cake for dessert: "We wouldn't have all this if we celebrated Christmas at home," said Xavier, a 44-year-old at a roundabout in Somain, northern France.

He was among some 30 people having dinner ahead of Christmas Eve mass on Monday night, savouring the generosity of supporters who donated the delicacies, as well as the newfound camaraderie forged in the "yellow vest" movement.

"At the beginning we were protesting against fuel prices, but we've become friends and tell ourselves, 'We're not all alone'," added Christine, 51.

Since erupting on social media in October, the grassroots campaign has ballooned into widespread anger over rising costs of living and Macron's perceived neglect of struggling families in rural and small-town France.

Mass demonstrations launched on November 17 have spiralled into vandalism and violent clashes in Paris and other cities, posing the biggest challenge for Macron since his May 2017 election.

"The thing which brings us all together is that we're sick and tired of struggling," Alexandre, a 38-year-old labourer, said at the roundabout in Somain, alongside his wife and two children.

A new protest has been called for December 31 in Paris on the Champs-Elysees, where tens of thousands of tourists and locals traditionally gather to ring in the new year.

Prime Minister Edouard Philippe has promised to "restore order" after the latest violence Saturday night, when three police on motorcycles had to flee dozens of attackers on the capital's iconic avenue.

The protests have enjoyed widespread public approval, especially in areas like Somain, which has been hit hard by the decline of coal mining and other heavy industry in northern France.

Protesters themselves say their movement has fostered a newfound sense of community and solidarity.

"It's my second family," said Laurent, brandishing a French flag around a fire next to his 19-year-old son, Kevin. "We've gotten used to seeing each other every day for a month now."

"At the beginning I didn't know anyone, but we've become a family -- that's the only good thing Macron has done, to bring people closer together," added Christophe Damiens, next to a sign saying "Macron, Scram!"

"The more he squeezes us, the more people will be here, even more united."

Macron says he has heard their demands, and cancelled fuel tax increases set for January while offering a minimum wage hike along with other financial relief.

But many yellow vests, so-called for the high-visibility safety vests drivers must keep in the cars, say it's not enough, calling for further tax cuts, Swiss-style citizen referendums -- and Macron's resignation.

"That guy, he eats caviar with the soldiers, but he should come see his citizens, and listen to us," said Jean-Luc Leclerc, a retired forklift operator, referring to Macron's Christmas visit to French soldiers in Chad last weekend- though no press coverage mentioned caviar.

But Macron has struggled to shake off his reputation as an elite Parisian "president of the rich," unable to understand the monthly struggle of millions to make ends meet.

Father Joseph Nurchi, donning a yellow vest, assured the Somain protesters that "the Church is on the side of the losers" as he prepared to celebrate a mass on site late Monday.

"I wanted to be next to the most vulnerable tonight," he added. "It's a revolt that has moved me."

(This story has not been edited by NDTV staff and is auto-generated from a syndicated feed.)
Comments
ChristmasFrench ProtesterPresident Emmanuel Macron