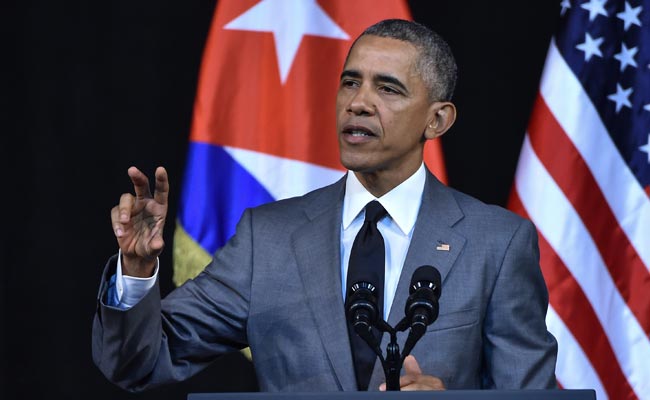 In a veiled attack on Republican White House hopefuls Donald Trump and Ted Cruz, US President Barack Obama said attempts to stigmatise the Muslim community should be rejected. (File photo)

Washington: In a veiled attack on Republican White House hopefuls Donald Trump and Ted Cruz, President Barack Obama today described Muslim-Americans as the "most important partners" in the fight against ISIS and asserted that attempts to stigmatise the community should be rejected.

"Our determination to win the battle against ISIL's hateful and violent propaganda -- a distorted view of Islam that aims to radicalise young Muslims to their cause," President Obama said in his weekly web and radio address to the nation.

"In that effort, our most important partners are American Muslims. That's why we have to reject any attempt to stigmatise Muslim-Americans and their enormous contributions to our country and our way of life," said the US President in an apparent reference to the recent anti-Muslim rhetoric of top Republican presidential candidates - Donald Trump and Ted Cruz.

In the aftermath of the terrorist attack in Brussels, Mr Cruz called for increased surveillance of Muslim neighbourhoods while Mr Trump reiterated that Muslims be temporarily be prevented from entering the country.

"Such attempts are contrary to our character, to our values and to our history as a nation built around the idea of religious freedom. It's also counterproductive. It plays right into the hands of terrorists who want to turn us against one another; who need a reason to recruit more people to their hateful cause," President Obama said.

"I am a father. And just like any other parent, the awful images from Brussels draw my thoughts to my own children's safety. That's also why you should be confident that defeating ISIL remains our top military, intelligence, and national security priority," he said.

Referring to the Brussels terrorist attack that claimed at least 30 lives and injured 300 others, President Obama said Belgium is a close friend and ally of the United States.

"And when it comes to our friends, America has their backing. Especially as we fight the scourge of terrorism. More broadly, we're going to continue to root out and defeat ISIL," he said.

"We've been taking out ISIL leadership, and this week, we removed one of their top leaders from the battlefield -- permanently. A relentless air campaign -- and support for forces in Iraq and Syria who are fighting ISIL on the ground -- has allowed us to take approximately forty per cent of the populated territory that ISIL once held in Iraq," he added.