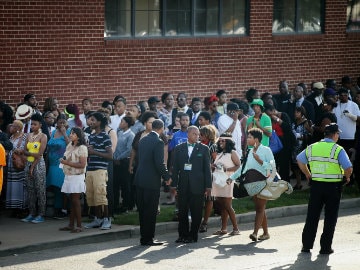 Guests wait to enter the Missionary Baptist Church for the funeral of Michael Brown. AFP

St Louis: Mourners gathered to remember Michael Brown in an emotional service that consecrated the killing of the black 18-year-old by a white police officer as another in the long history of the civil rights movement, and implored black Americans to change their protest chants into law.

The crowd of more than 4,500 people on Monday included the parents of Trayvon Martin, the unarmed 17-year-old African-American fatally shot by a neighborhood watch volunteer in Florida, along with a cousin of Emmitt Till, a 14-year-old murdered by several white men while visiting Mississippi in 1955. Till's killing galvanized the civil rights movement.

"Show up at the voting booths. Let your voices be heard, and let everyone know that we have had enough of all of this," said Eric Davis, one of Brown's cousins.

Civil rights leader Rev. Al Sharpton showed up at the funeral to call for a movement that seeks to clean up police forces and the communities they serve.

Two uncles remembered how Brown had once predicted that someday the whole world would know his name.

"He did not know he was offering up a divine prophecy," Bernard Ewing said.

The service at Friendly Temple Missionary Baptist Church in St. Louis at times seemed like a cross between a gospel revival and a rock concert. It began with upbeat music punctuated by clapping. Some people danced in place.

The Rev. Charles Ewing, the uncle who delivered the eulogy, said Brown "prophetically spoke his demise." And now his blood is "crying from the ground. Crying for vengeance. Crying for justice."

Poster-size photos of Brown, wearing headphones, were on each side of the casket, which had a St. Louis Cardinals ball cap atop it. Large projection screens showed a photo of him clutching his high school diploma while wearing a cap and gown. Two days after his death, he had been scheduled to start training to become a heating and air-conditioning technician.

Brown, who was to be buried in a St. Louis cemetery, was unarmed when he was killed. A grand jury is considering evidence in the case, and a federal investigation is also underway.

Police have said a scuffle broke out Aug. 9 after officer Darren Wilson told Brown and a friend to move out of the street and onto a sidewalk in the St. Louis suburb of Ferguson. Police said Wilson was pushed into his squad car and physically assaulted. Some witnesses have reported seeing Brown's arms in the air in an act of surrender. An autopsy found he was shot at least six times.

Relatives denounced a video released by police, who say it shows Brown snatching cigars from a convenience store just before he was killed. In the video, the person said to be Brown grabs a clerk by the shirt and forcefully pushes him into a display rack.

Sharpton also took the black community to task, saying it should be as upset about black-on-black crime as it is about police violence: "We have to be outraged by our disrespect for each other."

"Blackness," he added, "has never been about being a gangster or a thug."

Money and possessions mean little, he said, "if we can't protect a child walking down the street in Ferguson" and bring justice.

The request appeared to be honored. At the Ferguson Police Department, where a small but steady group of protesters have stood vigil, a handmade sign announced a "break for funeral." On Monday afternoon, the West Florissant Avenue commercial corridor was also devoid of protesters, whose ranks have typically swelled as days turned to nights.

The mourners came to show their support because "it could be any one of us," Thomas said.

Angela Pierre, a machine operator who once lived in Ferguson, said she hopes the funeral helps turn a page and eases tensions. Most important, she hopes it provides healing for Brown's family.

"I really wanted to just be here today to pray for the family and pray for peace," said Pierre, 48, who is black. "When all of this dies down, there's still a mother, father and a family who's lost someone. Sometimes a lot of the unrest takes away from that."

Monday also marked the first day back at school for students in the Ferguson-Florissant School District. Classes had been scheduled to begin Aug. 14 but were postponed because of safety concerns.

Promoted
Listen to the latest songs, only on JioSaavn.com
"We're ready to move forward," said Marcus Baker, a junior at McCluer South-Berkeley High School. "But we're still going to remember him."