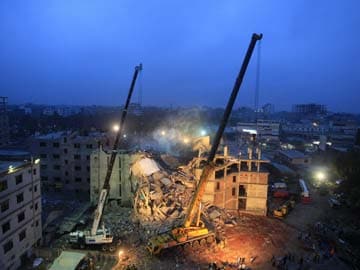 File photo of Building that collapsed in Savar, on the outskirts of Dhaka. (Agence France-Presse)

Dhaka: Bangladesh police said on Wednesday they have recovered a skull and what are believed to be other human remains from the ruins of a garment factory complex which collapsed last year killing more than 1,000 people.

Police said street children spotted the skull on Tuesday along with bone fragments while rifling through debris just behind the site of the former Rana Plaza complex in Savar on the outskirts of Dhaka.

"We have recovered the skull and the bones and sent them for tests in the Dhaka Medical College for confirmation if those were really human remains," Savar local police chief Dilip Kumar Saha told AFP.

The discovery is the latest from the site, with several skulls and bone pieces also found last December, reinforcing accusations by labour groups that the operation to rescue workers and retrieve bodies was wrapped up too quickly.

News of the recovery sparked protests at the site by scores of labour activists and relatives of garment workers still missing in the tragedy last April.

The protesters staged a sit-in at the site, shouting slogans and alleging a cover-up by Bangladeshi authorities.

Some 3,500 workers were trapped when the nine-storey factory complex imploded in one of the world's worst industrial disasters.

Authorities have said 1,138 people, most of them women, died in the disaster with more than 150 people still listed as missing.

Labour activist Taslima Akter said, the latest recovery proved that authorities had called off the rescue operation too soon.

Promoted
Listen to the latest songs, only on JioSaavn.com
"They did a sloppy job and called off the rescue works without recovering all the bodies," said Ms Akter from Bangladesh Garment Workers Solidarity.

"The recoveries are the remains of some of the 158 people who are still missing some 17 months after the tragedy," she told AFP.