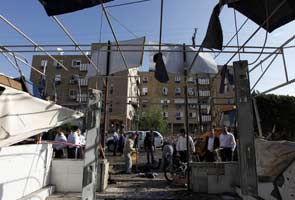 Jerusalem: Sporadic missile fire from the Gaza Strip hit southern Israel on Monday for a fourth straight day, with Egypt trying to secure a truce and Israel warning it would toughen its response if the violence continued.

The Israeli military said Palestinian militants had fired 11 rockets through the morning, ending an overnight lull and adding to more than 110 launched in the preceding 72 hours.

One of the missiles hit a house in the southern Israeli town of Netivot, causing damage but no injuries.

Six Palestinians have been killed by Israeli shells fired on Gaza, including four civilians, and 40 wounded. Eight Israelis have also been wounded in the cross-border attacks.

"We have a full box of tools that we have not yet used," Israeli Vice Prime Minister Moshe Yaalon told Army Radio. "We will need to toughen our response until Hamas says 'enough' and ends the fire."

The Islamist movement Hamas, which refuses to recognise Israel's right to exist, governs in Gaza. While it took part in weekend missile launches, it did not claim responsibility for the Monday attacks, suggesting it was looking to step back.

A Palestinian official with knowledge of Egypt's diplomatic efforts said that although there was no formal truce in place, Hamas understood the need for calm. The official said another group, Islamic Jihad, also acknowledged the ceasefire.

"The Islamic Jihad did not fire since last night. This means they have accepted the understanding too," the official said.

Monday's launches were claimed by smaller groups, such as the radical Salafi organisation, the Shoura Council of the Mujahedeen, and Israeli leaders are likely to come under strong domestic pressure to respond with force if the hits continue.

Israel went to war against Hamas in the winter of 2008-2009 but has shown little appetite for a new round that could strain fraught relations with the new Islamist-rooted government in neighbouring Egypt, which made peace with Israel in 1979.

But conservative Prime Minister Benjamin Netanyahu may be reluctant to seem weak ahead of a January 22 general election that opinion polls currently predict he will win.

Yaalon admitted there was no "bang and we're done" solution and declined to say if Israel would return to a former policy of targeted killings of Gaza leaders.

"I am not calling for any one thing specifically," he said.

There have been regular upswings in violence in recent months, with the interluding periods of quiet getting shorter.

Israel said the latest flare-up started on Thursday with a fierce border clash. On Saturday, a Palestinian missile strike wounded four Israeli troops on a jeep patrol along the boundary, triggering army shelling on Gaza in which the four civilians died.

In turn dozens of mortars and rockets were launched at Israel and the military carried out a series of air strikes throughout the Gaza Strip.

Top selling Israeli daily Yedioth Ahronoth said the United States had given a green light for an Israeli operation in Gaza and Netanyahu was due to brief foreign ambassadors on the situation later in the day.

"President Mohammed Mursi, the president of the biggest neighbouring Arab country, (has) said: We will not allow a new war on Gaza and the Palestinian blood is our blood," Youssef Rizqa wrote in the daily pro-Hamas Felesteen newspaper.

"Such a safety net did not exist before. What existed was just the opposite," he said, referring to the policies of Egypt's ousted president, Hosni Mubarak.
© Thomson Reuters 2012
Comments
Missile fire