Months After Earthquake, Why Nepal Is On The Edge Right Now

Nepalese police arrest an opposition supporter during a general strike against the draft of the new constitution, in Kathmandu. (AFP Photo)

Biratnagar, Nepal: For over two weeks now, hundreds of trucks from India carrying supplies to Nepal's capital Kathmandu and other parts of the country, are stranded on a highway close to Nepal's Biratnagar town. Several kilometres of lines have formed on the road, and for the moment, there seems to be no resolution in sight.

A massive agitation in many areas in the country over a new constitution means prices of essential commodities have skyrocketed; potatoes are selling for over 200 Nepalese rupees in some parts of the country that imports much of its everyday goods from India.

Anger has been building for weeks in parts of Nepal after lawmakers struck a breakthrough deal on a new constitution, spurred by April's devastating earthquake.

The constitution was meant to cement peace after a 10-year insurgency led by former Maoist rebels and draw a line under centuries of inequality. But plans laid out in the draft charter to divide the country into seven provinces have sparked anger among historically marginalised communities who fear neglect under the new constitution.

On Monday, seven police officers were killed in western Nepal in clashes with demonstrators protesting against the proposed new constitution. Local media said thousands of protesters attacked police with axes, spears and bricks. 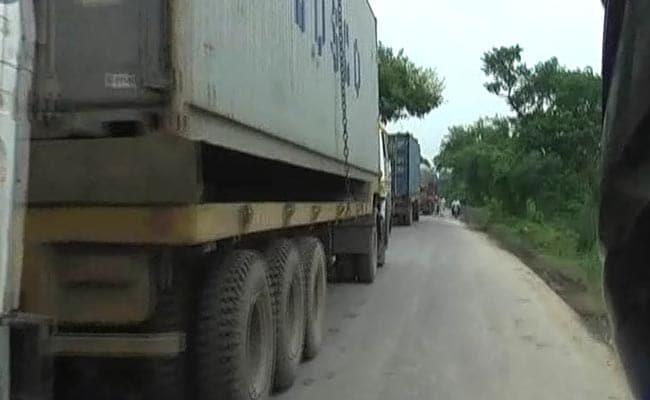 The trucks that crossed over from the Indo - Nepal border town of Jogbani have been stuck for days, forming kilometer-long queues.

In Biratnagar, another town that has seen violence and protests, no shop has opened up for many days now. Every day, hundreds of protestors take to the streets and march on them, closely watched by the police. The last few days have seen no major violence, but the tension is palpable.

"We want that our identity and culture be preserved, especially of those people who live in the plains, our rights should be protected too," says Raj Kumar Yadav, leader of an organisation in Biratnagar that's leading the protests.