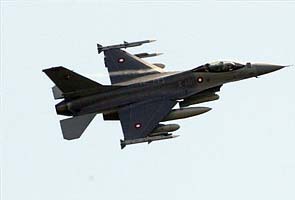 Rome: Six Danish F-16 fighter jets landed Saturday at the U.S. air base in Sicily, and American F-18s and Canadian CF-18 Hornets were in the region as the international military build-up mounted in Italy for action against Libya.

Italy has offered the use of seven military bases to help enforce the U.N.-authorized no-fly zone over Libya and protect Libyan civilians from Moammar Gaddafi's troops.

World leaders attending an emergency summit in Paris authorized immediate military action Saturday after Gaddafi's forces attacked rebel-held Benghazi, the heart of the uprising, with troops, tanks and warplanes. French jets began flying over this eastern Libya's city in an attempt to block attacks by Gaddafi's forces, an official said.

Danish air force spokesman Lars Skjoldan said the six their F-16s that arrived at the U.S. air base at Sigonella, Sicily on Saturday would be ready for operation in Libya by Sunday.

Andrew MacDougall, a spokesman for Canadian Prime Minister Stephen Harper, said it would take two days to prepare for any mission.

Sigonella's size and close proximity to Libya makes it an obvious staging point for any military action, but other bases were being readied as well, including the U.S. air base at Aviano in northern Italy.

Witnesses reported Saturday those five American F-18s, two C-17s and a C-130 cargo plane landed Saturday at Aviano, which is home to the 31st Fighter Wing.

Two U.S. officials said U.S. forces are not involved in the military operation at this point. Officials spoke on condition of anonymity.

Italy's defense minister Ignazio La Russa said Saturday that Italy wasn't just "renting out" its bases for others to use but was prepared to offer "moderate but determined" military support as well.

"We're doing it in the right way, not just giving the keys of our house to friends who will use them correctly, but also participating directly in an operation that surely we never would have wanted but which is necessary for the region's stability and safety of the Libyan people," he said.

In addition to the aircraft already in Italy, Norway said it was prepared to send six F-16 fighter jets to enforce the no-fly zone, but that they wouldn't be operational for five to six days.

Promoted
Listen to the latest songs, only on JioSaavn.com
One of the two British bases in Cyprus, meanwhile, was supporting AWACS surveillance aircraft assigned to monitor the no-fly zone over Libya, said spokesman Kristian Gray.

The aircraft are already at the Royal Air Force's Akrotiri base on the south coast of the island, he told The Associated Press on Saturday. Also deployed to the base is a team of British personnel to coordinate movement of British aircraft.