Microsoft ''Waiting To Find Out'' Why Bing Went Offline In China

The disruption raised fears among social media users that it was the latest foreign website to be blocked by China. Sites such as Facebook and Twitter have long been blocked by authorities using a censorship apparatus known as the "Great Firewall". 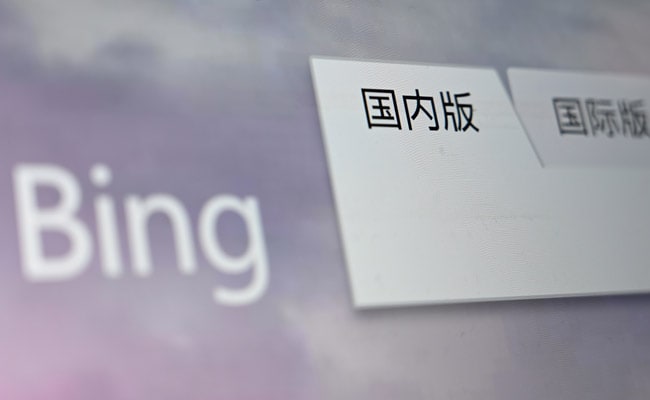 Bing's disruption came as a surprise because the search engine has followed China's censorship rules.

Microsoft is still trying to figure out why its Bing search engine temporarily went offline in China, the company's president said following speculation that it could have been blocked by censors.

The US firm's Chinese website, cn.bing.com, was accessible again late Thursday, one day after it suddenly went offline, temporarily taking away the most prominent foreign search engine in China.

The disruption raised fears among social media users that it was the latest foreign website to be blocked by China. Sites such as Facebook and Twitter have long been blocked by authorities using a censorship apparatus known as the "Great Firewall".

"This is not the first time it's happened. It happens periodically," Microsoft president Brad Smith told Fox Business News at the World Economic Forum in Davos.

Bing's temporary disruption came as a surprise because the search engine has followed China's censorship rules.

On Friday, for example, a Bing search for Liu Xiaobo, the dissident and Nobel Peace Prize laureate who died of cancer while still in custody last year, returned one message: "Results are removed in response to a notice of local law requirement."

Smith said it was understood that Bing did not have the same legal freedoms in China that it enjoyed in other countries.

"But at the same time, we stick to our guns. There are certain principles that we think it's important to stand up for, and we'll go at times into the negotiating room and the negotiations are sometimes pretty darn direct," he said.

While its rival Google shut down its search engine in China in 2010 after rows over censorship and hacking, Bing has continued to operate in the country, along with Microsoft-owned Skype.

Bing, however, has struggled to catch up to China's own Baidu search engine, which dominates the market even though many people in the country complain about the quality of its search results.

"I think what is interesting today is technology and sort of human rights, free expression, these issues are really intersecting and on certain days colliding more than in the past," he said.

"There's deals that we've turned down for things like facial recognition technology because we felt that people's rights will be put at risk.

"And I think more than ever, tech companies really need to think about these things, they need to be principled and you have to have a little moral courage, in my view, if you're going to be in this business and really take care of your customers."