Michelle Obama surprised the school with $100,000 in cash, Apple computers and a new outdoor basketball court. 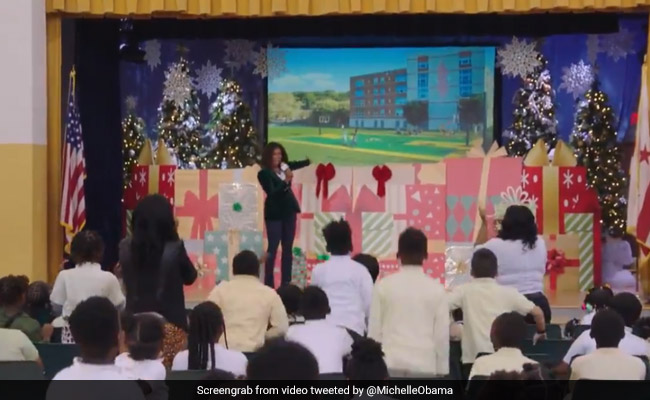 Her jaw dropped. The young girl jumped from her chair and gave a long screech before covering her mouth in shock.

She was barely able to look at the woman who walked through the door.

Obama visited the District of Columbia school in October as part of the NBC holiday special "Ellen's Greatest Night of Giveaways," which aired the first episode Tuesday. In the three-part series hosted by Ellen DeGeneres, celebrities deliver gifts to unsuspecting recipients.

Among them: Randle Highlands. Obama surprised the school with $100,000 in cash, Apple computers and a new outdoor basketball court. Adults dressed as elves delivered an iPad to each student.

I had so much fun putting a smile on all of these little faces from Randle Highlands Elementary School in Washington, D.C. Thanks to the @TheEllenShow for letting me be a part of #EllensGreatestNight!pic.twitter.com/3lOWaUAqQY

"When I look out at all of you, I see a room full of future doctors and teachers and engineers and presidents," Obama told a packed gymnasium. "And I want to make sure that you have the tools you need right now to help make that happen."

Students at the school come from mostly black and low-income families. Nearly 65% are considered at-risk, meaning they are in foster care, homeless or the families qualify for public assistance.

The principal, Kristie Edwards, said in the segment that teachers use their own money to help students, take families grocery shopping and purchase classroom supplies. A laundry machine on campus ensures that students have clean clothes.

One Randle Highlands employee who was not identified said in the segment that the school makes the best with what it has but told Obama that when it comes to the computer lab, "unfortunately we don't have a lot."

While students and teachers celebrated the gifts from the NBC show, education advocates and some city leaders questioned why a school system with a budget exceeding $1 billion a year required a donation so students could have adequate technology.

According to city data, the 400-student school received $4.3 million this academic year - a $300,000 drop from a year earlier despite a citywide increase in education spending.

The budget allocates $9,000 to educational and office supplies. And $4,300 is slated for technology-based learning.

Education leaders have said the school system shifted some support service expenses to its central offices, which accounts for budget drops at some campuses.

"We have a city that is capable of ensuring that schools do not need to rely on donations from anyone," said Elizabeth Davis, president of the Washington Teachers' Union.

The school system said in a statement the surprise Obama visit brought well-deserved attention to a school that has experienced significant academic gains in recent years.

D.C. schools spokesman Shayne Wells said the donation complemented city funding. He said the school system is purchasing technology devices for every child in third grade through high school, though students won't start receiving them till the next academic year.

Council member Vincent Gray, a Democrat, pushed last academic year to allocate more city dollars to schools such as Randle Highlands, which sits in a poor swath of D.C.

He said he hopes the high-profile donation brings attention to the funding that is still needed in D.C. schools.

"I hope this will also send a message to those who are preparing budgets for the next cycle that we need to make sure that these kids have the resources that they need," Gray said.

Cornelius Bailey, president of the Randle Highlands Civic Association, said he's thrilled with his neighborhood's moment in the spotlight. He sent his children to the school in the 1980s and is glad Obama and DeGeneres lent their celebrity to highlight the school.

"For any of the wards where you have median incomes that are not super high like they are in other parts of the city," Bailey said, "a little help is always useful."

And for Randle Highlands staff members, the gifts added to the love they hope their students feel each day on campus.

"If nothing else," Edwards said, "my legacy will be that they knew they were loved by me."