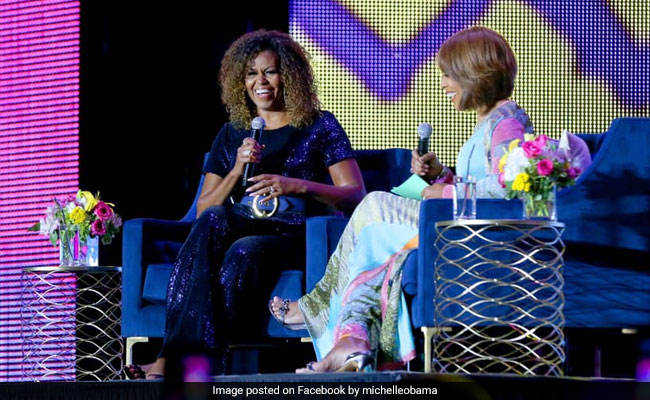 During Barack's inauguration, we made sure that the crowd looked like all of America: Michelle Obama

Moving out of any home is chaotic, but at the White House, moving the president's family is especially complicated, according to former first lady Michelle Obama. The best-selling author spoke about those final moments, as well as the Democratic presidential campaigns, with Gayle King in a nearly hourlong interview at the Essence Festival in New Orleans on Saturday.

On the night before the inauguration of President Donald Trump in January 2017, the Obama family was packing up, and first daughters Sasha and Malia asked to have a final sleepover with their friends.

On the morning of Inauguration Day, Obama explained, she was shooing her daughters' buddies out of the White House as she was getting ready. It was a farewell to the home that her children had known since they moved there in elementary school.

"The transition happens so quickly; it's like you don't even get to move your furniture out until the new president takes the oath of office," Obama said.

So there were a lot of tears - from the first daughters, from staff members. Between moving, saying goodbye and preparing for the new administration's inauguration, Obama said, "it was a lot emotionally."

Also, the Trump family was coming over for tea. Obama said she didn't want to greet them while she appeared to have tears in her eyes "because people would think that I was crying for other reasons," Obama said.

Then it came time for the inauguration itself. She recalled what she saw as a stark difference in crowds between the Obama inauguration and the Trump inauguration. As one of the few people of color in the audience, Obama said, she felt the event looked just the "opposite" compared with when her husband took the oath of office.

"During Barack's inauguration, we made sure that the crowd looked like all of America," she said.

She told King that when she left the White House that night, she was releasing eight years of exhaustion.

During the conversation, Obama also talked about the 2020 presidential election.

She said she and her husband would not support any Democratic presidential candidate until after the primaries. Former Vice President Joe Biden has said that he asked Barack Obama not to endorse him and that whoever does win the Democratic nomination "should win it on their own merits."

King asked whether Obama had thoughts about a recent "dust-up" during the Democratic debates, when Sen. Kamala Harris, D-Calif., challenged Biden on his opposition to court-ordered busing in the 1970s.

"I have been doing this rodeo far too long," Obama said. "No comment."

Asked about what qualities make a good president, Obama said it should be someone who is "loyal and honest and decent."

"It's a hard job, y'all," Obama said. "Let's just be clear. This isn't a joke. It's not a game. The leader of the free world, with a tweet, can start a war, can crush an economy, can change the future of our children."

After publishing her popular memoir, "Becoming," in 2018, Obama has been on tour for the book. She said she is looking forward to being an empty-nester and not having to "worry about whether your kid was going to wind up on Page Six."

"My kids are gone; they are gone," Obama said while laughing.