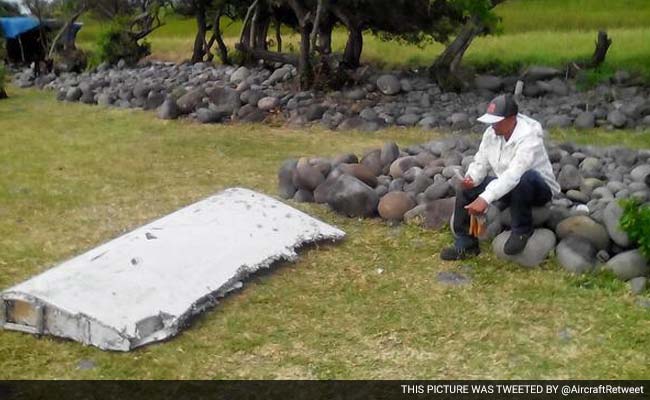 The piece of debris, washed ashore on Reunion Islands, in the southern Indian Ocean.

Paris: Air crash investigators risk being sidelined in a tussle to unlock the secrets of lost flight MH370, fuelling concerns that their role in making flying safer could be diminished.

By drifting on to Reunion Island, the barnacled remains of a Boeing wing part from the Malaysia Airlines jet have given the upper hand to a French judicial investigation, exposing for the second time this year how civil crash investigations struggle to compete with police-led probes.

For decades, reconstructions of disasters by specialist safety investigators have been seen as crucial to making aviation safer, with accident rates at historically low levels.

But in dozens of countries, notably France, they exist in uneasy co-habitation with separate criminal inquiries.

Simmering tensions over the sharing of evidence between civil and judicial investigators came into the open after the crash of a Germanwings jet into the French Alps in March.

They are under scrutiny again after Indian Ocean currents deposited the "flaperon" from the missing Malaysia Airlines flight into the hands of judges investigating the suspected manslaughter of four French citizens out of 239 people on board.

How France handles both cases could have a wider impact given its influence over aviation safety worldwide and the similarity between its civil-law system and most other jurisdictions.

Its BEA safety investigation board is regularly called in to look at incidents because France is home to Airbus <AIR.PA>, which makes up 42 percent of the world jetliner fleet.

Supporters of the French system of parallel investigations say it prevents cover-ups, supports families and benefits from stronger powers of discovery.

Concerns about judicial interference may cut little ice with MH370 families who have been frustrated at the apparent lack of results from the civil investigation into the disappearance of the Kuala Lumpur to Beijing flight.

"This kind of closed, unjust, and totally inefficient investigation is really hard for me to understand," said Jiang Hui, a Chinese man whose mother was aboard Flight MH370.

"The idea has never been to establish who is the bad guy, for the simple reason that it does no good when it comes to improving safety," said Paul-Louis Arslanian, former director of France's BEA air safety investigation agency.

"It is better to understand why errors were committed and what prevented this being identified."

It is a rare example of an industry being granted a global remit to ensure its safe development. But the 70-year-old system must reckon with modern demands for stricter corporate liability and the social media storm generated by every crash.

Add to this the fact that human factors have become a priority as technology reduces mechanical vulnerabilities, and experts say the pressure to cast blame is greater than ever.

While families wait for clues about the missing jet, 17 months after MH370 mysteriously vanished, the flaperon risks being submerged once again by jurisdictional in-fighting.

It was recovered by the gendarmerie on the French island, a military force accountable to French judges leading the criminal probe and not to the BEA or its Malaysian counterparts.

Relations between the gendarmerie and BEA have been prickly for years and hit a new low hours after the Germanwings crash that killed 150 people.

In an unprecedented move, the BEA's current director was summoned to police offices to face questions about the speed at which it had shared just-deciphered cockpit recordings, according to several people familiar with the incident. The BEA has defended its handling of Germanwings evidence.

Those tensions are fresh in the minds of those now handling the MH370 investigation. While prosecutors have pledged to share their findings in due course, a judicial source stressed the flaperon would remain under judicial control.

Experts from several international agencies were allowed to witness its inspection but only after a delay of several days and under a judge's supervision, and not on BEA premises.

"However you paint it, it gives the impression that the BEA and other investigators are working for the judiciary," said another former air crash investigator.

"It is a power struggle and in the long term it may be damaging for credibility of crash investigators generally."

Malaysia played down any conflict between the judicial probe and its own civil investigation, of which the BEA is part.

"They will go hand in hand. There's no clear distinction between their report and our report. Whatever they find they will add onto our investigation later," Transport Minister Liow Tiong Lai told Reuters.

But experts say it is a further setback for the Southeast Asian nation which struggled to establish an independent investigation in the face of criticism, only to see the first physical piece of evidence fall into the possession of French judges who have been asserting primacy over air accidents.

That may in turn heap pressure on a landmark EU law designed to preserve a "balance" between judicial and civil probes.

"I get worried when I see that we are not advancing as quickly as we should, that we are going backwards or trampling on the confidence that should exist between different parties," said Arslanian, one of the architects of the 2010 regulation.

"For now the trust between national and international partners is there, but you have to keep building it every day."

The debate about the blurring of judicial and civil roles could complicate efforts to improve safety by openly discussing problems in everyday operations.

"A lot of aviation professionals are fearful that by being frank to technical investigators they could end up in court," said Andreas Mateou, an Airbus A320 training captain and co-author of "Flying in the Face of Criminalization".

"The risk is that they will just fly on autopilot and share as little as possible."
© Thomson Reuters 2015