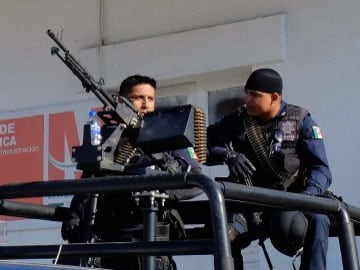 Members of the federal police stand guard outside the Municipal Palace of Nueva Italia community, Michoacan State, Mexico, on January 14, 2014

Apatzingan, Mexico: Mexican federal forces launched an offensive Tuesday to take over security in a violence-torn western state, seizing a drug cartel's bastion and clashing with vigilantes who refused to disarm.

A convoy of 200 military and federal police forces rumbled into Apatzingan and disarmed municipal police officers in the city, which is known as a stronghold of the Knights Templar gang in Michoacan state.

Hours earlier, soldiers arrived in towns held by vigilantes who have battled the cartel for the past year, leading to a confrontation which the civilian militia said killed four people, including a child.

The federal show of force in Michoacan's rural region known as Tierra Caliente, or Hot Country, came a day after the government urged vigilantes to lay down their arms, saying it would take over security.

After the display of government force, a spokesman for the vigilantes, Hipolito Mora, said his people would not seize more towns.

He said after a meeting with Mexican authorities that his forces felt more secure after the government action. But he made no mention of the vigilantes laying down arms.

Until now the vigilantes have said they would not do this until drug cartel leaders were captured.

Another spokesman for the vigilantes, Estanislao Beltran, said he would not comment on the results of the meeting with Mexican authorities until he discussed it with colleagues.

The military deployment was ordered Monday after the vigilantes seized more towns and surrounded Apatzingan, raising fears of an urban warfare in the city of 123,000 people.

Early Tuesday, a military convoy arrived in the community of Cuatro Caminos to seize weapons from vigilantes who had routed gangsters from the area, Beltran told AFP.

"We will never give up our weapons," Beltran said.

Residents blocked the road to demand that the soldiers return the guns to the militia, but one soldier fired at the crowd, he said.

Beltran said the four dead included one vigilante and an 11-year-old girl.

A victim's mother, Juana Perez, was in tears in front of her son's coffin hours after she said a stray bullet killed 25-year-old Rodrigo Benitez, a civilian who went out to show support to the vigilantes.

"We had gathered just to ask for peace and security. The army has to be careful," she told AFP.

The National Human Rights Commission said it would investigate the four deaths.

Federal authorities have yet to confirm any casualties while the state prosecutor's office said one person died.

In the town of Buenavista, around 100 militiamen blocked some 50 soldiers for about four hours before letting them leave on condition they stay away for at least three days.

Civilians first took up arms in February 2013 to oust the Knights Templar from the region, saying local police were either colluding with gangs or unable to deal with the violence and extortion rackets.

Since then, officials have alleged that at least some civilian militias were backed by a cartel, with critics noting that they used unlawful assault rifles that gangs usually own.

Analysts, however, say the government was happy to let vigilantes police the state until now, a risky tactic that could have replicated Colombia's experience with ultra-violent paramilitary militias.

The purpose of the deployment, he said, "is simply to restore legal order in a place that did not have it."

Vigilante leaders said they would only disarm when authorities finally arrest the cartel top bosses.

Pena Nieto had already deployed thousands of troops and federal police to the state in May, but their presence failed to discourage more towns to take up arms.

Ignoring repeated government warnings that their expansion would not be tolerated, the civilian militias continued to grow and seized around 20 towns.

Promoted
Listen to the latest songs, only on JioSaavn.com
The Knights Templar have accused the vigilantes of working for the rival Jalisco New Generation cartel, a charge the civilian militias deny.

Murillo Karam said vigilantes who were detained months ago confessed to being financed by a cartel.