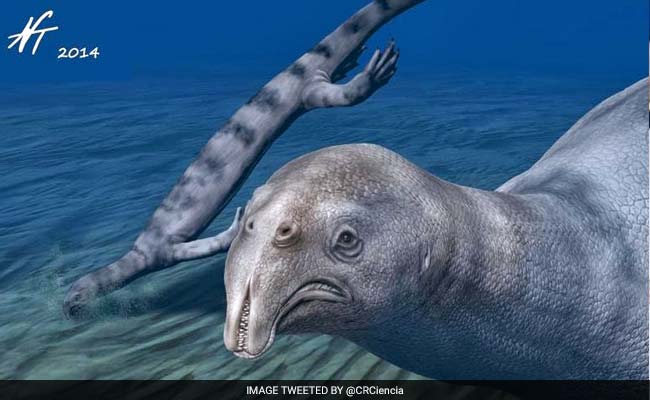 The world's first plant-eating marine reptile had wide jaw shaped like a hammerhead, and along the edge, it had peg-like teeth.

New York: A crocodile-sized sea reptile, that lived 242 million years ago in what today is southern China, represents the world's oldest species of herbivorous marine reptile, new research has found.

Scientists discovered a "bizarre" fossil of the animal in 2014. Its head was poorly preserved, but it seemed to have a flamingo-like beak.

The latest research has found that the "beak" was actually part of a hammerhead-shaped jaw apparatus, which it used to feed on plants on the ocean floor.

It is the earliest known example of a herbivorous marine reptile, the researchers said.

"It's a very strange animal," said study co-author Olivier Rieppel from The Field Museum in Chicago.

"It's got a hammerhead, which is unique, it's the first time we've seen a reptile like this," Mr Rieppel noted.

But newly discovered fossils made it clearer how its "strange teeth" were actually configured.

Its wide jaw was shaped like a hammerhead, and along the edge, it had peg-like teeth. Then, further into its mouth, it had bunches of needle-like teeth.

"To figure out how the jaw fit together and how the animal actually fed, we bought some children's clay, kind of like Play-Doh, and rebuilt it with toothpicks to represent the teeth," Mr Rieppel said.

"We looked at how the upper and lower jaw locked together, and that's how we proceeded and described it," Mr Rieppel noted.

Not only does this discovery solve the mystery of the strange-toothed animal, but it also provides us with an example of the first herbivorous marine reptile.

"The jaw structure is clearly that of an herbivore," Mr Rieppel said.

"It has similarities to other marine animals that ate plants with a filter-feeding system, but Atopodentatus is older than them by about eight million years," Mr Rieppel noted.

The study was published in the journal Science Advances.