It has become a tradition at the Capitol to invite a child from the same state as the tree to help light the symbol of holiday cheer. 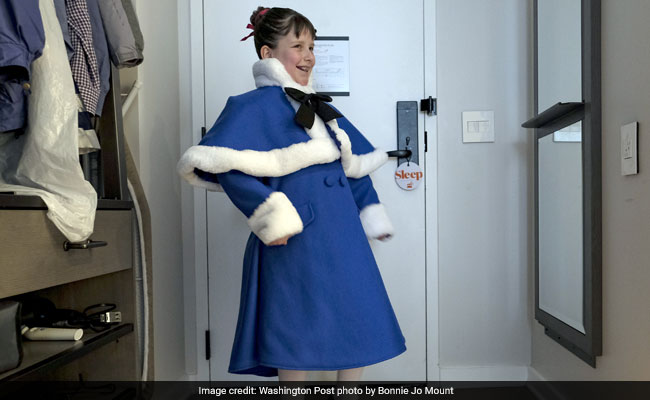 Brigette won the chance to light the Capitol tree after winning a statewide essay contest.

She played violin before an audience at the National Press Club. She's met members of Congress, Cabinet officials and rock stars. On Thursday, she stood with House Speaker Paul Ryan and flipped the switch to light the Capitol Christmas Tree.

But Brigette Harrington is no dignitary or head of state.

She's a 9-year-old girl from Oregon.

Harrington, who would tell you that she is actually "9 and a half," is from Hillsboro, near Portland. This is her first time in the District.

"It's a little almost overwhelming," she said Wednesday, flashing her festive green-and-red braces with a wide smile.

Brigette won the chance to travel to Washington and light the Capitol tree - a noble fir plucked from Oregon's Willamette National Forest - in a statewide contest that asked elementary schoolers to write about why they love the state's outdoors.

It has become a tradition at the Capitol to invite a child from the same state as the tree to help light the symbol of holiday cheer. The writing contest in recent years has served as a way to choose the child.

"I tried to think of some good things to put in the poem, some details and topics, and I came up with the four seasons and how lucky Oregon is to have those, because not everybody does," she said. "Everything that my family has done over the four seasons - picking berries, hiking, kayaking. We do so much. We love the outdoors."

On the October morning she learned she won, Brigette was sitting in class at Jackson Elementary School when the governor walked in, surrounded by a gaggle of cameras and trailed by Kim and Scott Harrington, Brigette's parents.

"I was a little suspicious, because it's not every day the governor walks into your classroom," Brigette said. "At first I was like, 'Maybe somebody won here, but it's probably not me' - because there were a couple other entries in my classroom and it could have been any of us."

Gov. Kate Brown, D, announced that Brigette's poem had triumphed over 1,200 other entries from fourth-graders throughout the state.

"I cried tears of joy," Brigette said, miming tears cascading down her face.

Even then, the Harringtons said, they had no idea what they were in for.

For the next two months, Brigette toured Oregon, reciting her poem in various cities and towns along a 23-stop tour. She followed the tree, a noble fir indigenous to the American Northwest, as it was paraded throughout the state before starting the 3,000-mile trip to Washington.

The tree arrived on the West Lawn on Nov. 26, after which it was decorated with thousands of ornaments handcrafted by Oregon residents.

"None of us initially realized that this was not truly about a tree, that it's so much more," said Kim Harrington, 43. "The most amazing thing for us is seeing how this has brought such joy and happiness and such a connectedness among all the people it touches."

It's been quite the week.

Accompanied by her parents and three grandparents, Brigette has been ushered into galas and lunches and receptions since she arrived in the District on Saturday. Every sign, program and invitation has been addressed to "Brigette Harrington and guests," her father chuckled.

"We're just riding around on her shirttails," said Scott Harrington, 43.

She visited the Capitol Rotunda to pay respects to the late George H.W. Bush, who served as president 20 years before she was born.

On Sunday, she lost a tooth in the National Museum of American History.

"I was just eating a rice crispy - and then I swallowed it with that rice crispy," she said. "The tooth fairy said: 'It's okay you swallowed your tooth. Most kids do it anyway.' "

The tradition of the Capitol Christmas Tree, also known as "The People's Tree," began when House Speaker John McCormack, D-Mass., placed a live Christmas tree on the Capitol lawn in 1964.

Six years later, the Architect of Capitol office asked the U.S. Forest Service to find a Christmas tree for the Capitol grounds. Every year since, the Forest Service has set out to find a tree from a national park.

Willamette National Forest, the origin of this year's tree, is a coniferous forest in the Cascade Mountains that encompasses more than 1.6 million acres. It's the first time a tree from that park has been featured at the Capitol.

"We're pretty proud of that," Scott Harrington said. "We produce a lot of Christmas trees out in Oregon."

On Thursday, Brigette read a shortened version of her poem, which clocks in at about three minutes unabridged, before helping Ryan, R-Wis., light the tree.

" 'Twas the month before Christmas, and all through my mind / Swirled thoughts of my Oregon, all intertwined /The four seasons how extraordinary, each one of a kind," she wrote.

She said she found inspiration all around her - the creek in her backyard, the trees in the woods nearby, the mountains, the ocean, the snow and the rain.

What does she think of the District of Columbia?

"It's amazing," she said. "But all anyone back home wants to know is if I've met the president. I have not."