Meet Stormy (Not Daniels), The Dancer Who Embraced The Power Of Getting Naked

She was also the first American adult entertainer to become famous as Stormy and whose life intersected, maybe tangentially, with national politics. 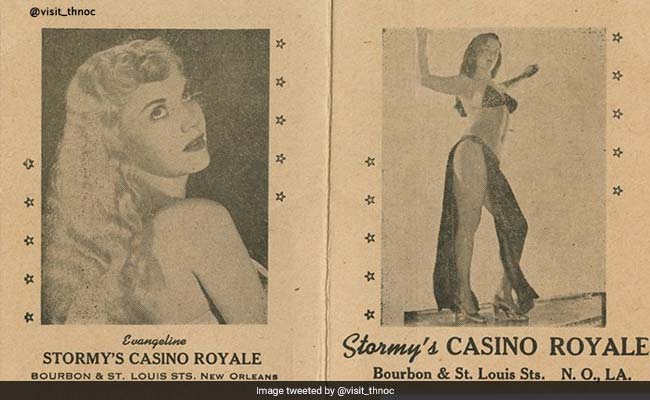 Stormy's Casino Royale, bore the legendary stripper's name as seen in the leaf above.

Louisiana, USA: She arrived at Louisiana State University in Baton Rouge one dreary afternoon in 1948, with a live band and reporters and photographers in tow. They stopped in front of the campus field house, and there, standing on a truck bed, with the accompaniment of a Dixieland band, the voluptuous young woman with dark hair and porcelain skin began her strip show - much to the horror of university officials.

While some students clapped and yelled, others saw the act as a mockery of their campus. A group led by football players rushed toward the makeshift stage, smashed the piano and chased away the band. Then, they scooped up the young woman and dropped her into a man-made lake.

"Well, it was all a lot of fun then," she would tell Cabaret magazine years later. "I still hear from the guys who were there when it happened. I don't harbor any ill will about it at all."

Stacy Lawrence, better known as Stormy, was one of Louisiana's most popular exotic dancers, the headliner of a club at the heart of the French Quarter that, for years, bore her name. She was the Stormy in Stormy's Casino Royale, the "belle of Bourbon Street," as one magazine described her.

She was also the first American adult entertainer to become famous as Stormy and whose life intersected, at least tangentially, with national politics. Decades later, an adult entertainer using the same nom de naked would become entrenched in the political news cycle; Stephanie Clifford, also known as Stormy Daniels, was born just a few years before Lawrence's 1982 death.

Some of Lawrence's notoriety came in a brief foray into politics, in 1952, when she offered to help Alabama Gov. James "Kissin' Jim" Folsom, D, in an unsuccessful bid for the presidency.

But she was better known for her ability to work the publicity machine, which helped her stand out among the dozens of other dancers who flocked to New Orleans during the glory days of burlesque.

That she was tossed into the lake at LSU only made her more popular. That incident, in a way, helped propel her career on Bourbon Street.

"I just said, 'Hurray for Stormy!' What else can you say?" Kitty West, a former exotic dancer who worked with Lawrence, told The Washington Post. "I mean, they just didn't allow that out there in the university, but she did it. And more power to her. I think she did whatever she could do to let people know that she was Stormy."

Lawrence sought the publicity and reveled in it - until she didn't. Little is known about her life after she stopped being Stormy; her name was rarely seen in the media for decades, until the New Orleans Advocate featured her this month.

But during her heyday, in the crowded burlesque industry that found a home in New Orleans, Lawrence was "one of the Quarter's most explosive performers," Holiday magazine wrote - a star who walked onstage "to a fanfare of thunder and lightning," and to the song "Stormy Weather."

She ventured out of the conventional, said New Orleans burlesque producer Rick Delaup, performing on top of bars when no one else was doing it and, yes, stripping on a truck bed in front of students on a college campus.

Her style wasn't like an energetic striptease, but more of a slow, sultry dance - sometimes with a cigarette in her mouth and usually with a lot of attitude, said Delaup, who has researched Lawrence's life and now produces monthly burlesque shows at the House of Blues in New Orleans.

Lawrence, who spent much of her life in Louisiana, was no stranger to show business. Her father owned a small carnival that toured the United States, according to Cabaret magazine. And she was born a dancer, like her mother, West said.

She came to Bourbon Street in 1945, when she was in her late teens. She sang and helped manage shows. She occasionally advised strippers on their techniques, too. Some of the girls resented the intrusion and challenged her: Try dancing yourself if you think you can do a better job, they said.

"I said I thought I could," Lawrence told a newspaper in 1947, the year she began performing as an exotic dancer.

She first stripped at the Old Opera House, and later at Casino Royale, which subsequently became Stormy's Casino Royale, Delaup said. The club featured some of the most eccentric performances on Bourbon Street, according to Nina Bozak of the Historic New Orleans Collection.

West, now 88, performed there as Evangeline the Oyster Girl - so named because she emerged from a giant oyster shell during her act. There was also Divena the Sensational Aquatease, who stripped inside a water tank.

Lawrence was both adored and scorned in the media.

Either way, she relished the publicity. Here's what she wrote on the back of a post card that her club used for promotion:

"If the name 'Stormy' means nothing to you, you're a person apart, but the rest of the populace hasn't fared as well. The poor dears have had one rough diet of it on my account. I've been fed them by 'Look,' 'Life,' 'Holiday,' 'Downbeat,' 'Pip,' 'Squeek,' and 'Schmo' and damn near every daily 'Blaaat' in the country has had me profiled or reviled, smeared or endeared or something at one time or another."

"Parisian magazines have hailed me the perfect French type.

"South American journals have been just as hysterically certain that I'm perfectly Spanish, or else."

Toward the end, she said: "Mmmmmm. The more publicity, the more loot. Mmmmmm."

At times, she spoke somewhat philosophically about stripping.

"Anything you do - no matter what it is - if you do it well enough, can be lifted to an art," she told Cabaret magazine in 1956. "Or at the very least it can be lifted into something respectable."

Performing may look effortless, she once told a newspaper, but it took a lot of work to match the music's tempo and strike that delicate balance between "what is vulgar and what is decent - but still entertaining."

Offstage, she was an avid reader of biographies and had big bookshelves filled with volumes on different subjects in her small apartment in the middle of the French Quarter.

"I like to read about people - and what makes them what they are," she told Cabaret.

She also had an enormous record collection; jazz musicians Dave Brubeck and Shorty Rogers were her favorites.

Stormy's Casino Royale was shut down in the late 1950s amid a lawsuit between the club owner and his landlord, and its namesake star faded from the spotlight.

She was married briefly to a reporter, though it's unclear when the two wed, and they had a son, John S. Lester.

Lester told the Times-Picayune in 1997 that his parents divorced when he was a baby. His father was a writer for the Newark Star-Ledger in New Jersey, where the family lived at one point. But Lawrence wanted to come back to New Orleans. Lester lived with his father and didn't see much of his mother growing up, he said.

"Hers was a night life, his was a day life," Lester told the Times-Picayune. "I think she knew he would take better care of me than she could. There was no animosity; Dad never said an unkind word about her."

Keith Marshall, a friend she met years after Stormy's closed, said Lawrence quit dancing after a car accident and botched hip surgery. Lawrence resigned herself to a quieter life, he said, until eventually, nobody knew who she once was.

Marshall and Lawrence met in 1981, when she worked as a purchasing agent at his store, Dixie Art Supplies, a few miles from the French Quarter. She showed up to work every day dressed in black pants, a white long-sleeved blouse that sometimes had ruffles, and glossy black stiletto heels that boosted her to about 6 feet, Marshall said.

She walked with a slight limp from her surgery, he said, but still was poised in her movements, as if she were gliding on a runway. "So dramatic and so impressive," he mused.

Marshall laughed about every story he told of Lawrence.

Like that time she talked about working as a purchasing agent for Mitsubishi, which Marshall said she pronounced as "Mitsi-bitsi" in her naturally high-pitched voice. It was too corporate for her, so she left, he said.

Or that time she talked about training girls at the club, and how she used to stand behind curtains onstage to catch them when they fell, mid-act.

She talked about her Louisiana State University stunt, and how the lake water made her body "twitter" - her exact word, according to Marshall.

"She said, 'Damn, that water was cold!'" Marshall recalled, laughing.

After less than a year at Dixie Art Supplies, Lawrence suddenly stopped showing up to work. On the third day of her absence, Marshall saw the police report.

Her body was found in her apartment, where she had been living alone. She had suffered from emphysema, according to the Associated Press. She was 54.

"I just remember thinking . . . I didn't get to tell her goodbye," Marshall said.

The UPI story about Lawrence's death described her as "a legendary Bourton Street stripper of the 1940s" who sought and achieved fame by doing the outlandish and the unexpected.

Somebody who stripped for a living could be easily dismissed as nothing more than just that, Marshall said. But not his friend, Stormy.

Promoted
Listen to the latest songs, only on JioSaavn.com
"She was a lovely person," he said, "who happened to do striptease."