Nepal's living Goddess made a public appearance on the occasion of Indrajatra - the traditional festival observed to worship Devraj Indra. 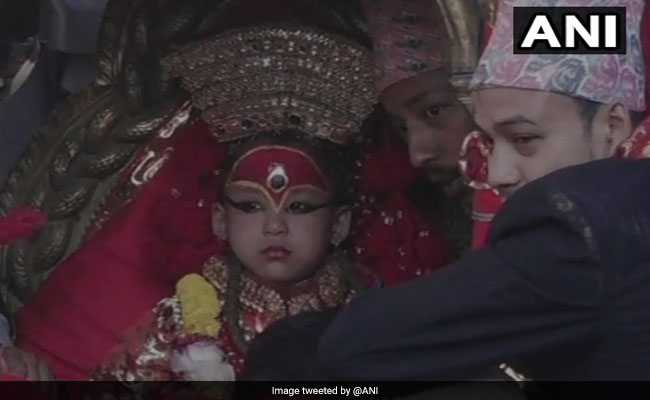 She made a public appearance on Monday on the occasion of Indrajatra - the traditional festival observed to worship Devraj Indra, the God of rain and good harvest.

Shakya was brought out of her residence, "Kumari Ghar", located in Basantapur Durbar Square area, a World UNESCO Heritage Site.

A large crowd had gathered from the early hours of Monday when she was brought out of the palace in a chariot and taken around the ancient city. Along with the living Goddess Kumari, Lord Ganesh and Bhairab were also taken around the city.

Various cultural shows, including the dance of Lakhe and other deities, were also staged in the premises of the ancient palace of Nepal. These cultural performances were led by scores of youths.

The eight-day long festival of Indrajatra is observed with great fervor in Kathmandu valley along with Dhulikhel and Dolakha.

The annual festival of Indrajatra begins from Bhadra Shukla Chaturdashi of the Nepali month of Bhadra.

The Indrajatra festival is considered to be a celebration after defeating enemies. It is believed that worship of Lord Indra gives strength.

Nepal has the tradition of worshiping a girl from the Newar Community - natives of the Kathmandu Valley- as a Kumari after she undergoes various religious tests.

The successor to a Kumari is chosen when she is about to attain puberty.