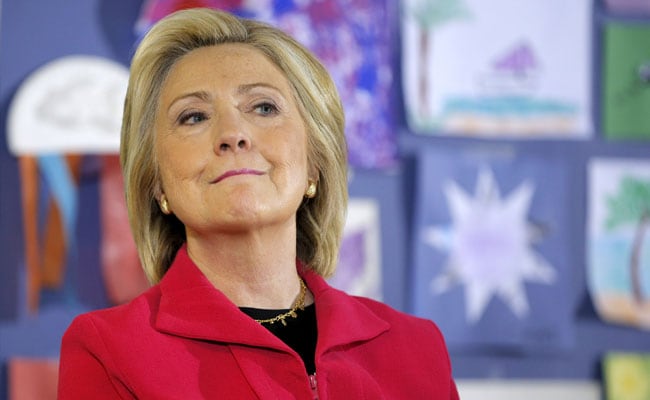 Democratic presidential candidate Hillary Clinton listens to a speaker during a campaign stop at the YMCA in Rochester, New Hampshire on June 15, 2015. (Reuters)

New York: Don't call Chris Christie rich. The Clintons say they still have bills to pay. And Mike Huckabee? Despite his wealth, he was born "blue collar, not blue blood."

Touting one's humble beginnings has been part of US Presidential contenders' playbook going back to Abraham Lincoln's talk of his log cabin youth. But the 2016 hopefuls are working harder than ever to convince voters they are just like them.

In burnishing their working, and middle-class credentials the hopefuls are following a shift in the political debate from jobs and a fragile economic recovery during the 2012 campaign to one now centered on income inequality.

That reflects a deepening sense that seven years after the Great Recession any gains have gone to the wealthy, while millions of Americans continue to struggle.

"The divide between the governing elite and the voters has never been so big," said David Carney, a New Hampshire-based Republican strategist.

Most of today's presidential candidates, he noted, come from privileged backgrounds, leaving them open to criticism that they can't relate to the money worries of so many families.

"Wide swathes of the country, geographically and demographically, have been left behind. Politicians are clever enough to figure that out."

Many respondents in Reuters polls say a candidate's wealth would influence how they vote. The number of those who say they would be much less or somewhat less likely to support a "very wealthy" presidential candidate rose to 42 per cent in March 2015 from 39 per cent in November 2012.

To be sure, Americans have elected plenty of rich presidents, such as John F Kennedy in 1960.

Tim Albrecht, a Republican strategist from Iowa, calls the current phenomenon of candidates playing down their wealth "the Romney effect."

Mitt Romney, the 2012 Republican nominee, often came across as distant or indifferent, a factor in his general election loss. The $250 million fortune he amassed as a co-founder of private equity firm Bain Capital didn't help.

With a crowded field, at least 12 Republican hopefuls have declared so far, even just a few percentage points could separate front runners from also rans, making it crucial to appeal to as many people as possible.

Thus the humble roots card from many candidates, even if most are still among the wealthiest Americans.

While many of them skew quite wealthy, such as former Hewlett-Packard CEO Carly Fiorina, worth about $59 million, a few have more modest nest eggs, such as Wisconsin Governor Scott Walker, whose most recent financial disclosure suggests a net worth that is perhaps in the tens of thousands, but is possibly even negative.

The humbler-than-thou game nonetheless favors candidates such as Florida Senator Marco Rubio, who often talks of his Cuban immigrant parents, his father a bartender, his mother a maid, and his own student debt. It is no coincidence that reforming student loans is one of his policy proposals.

His net worth was $443,509 in 2013, according to the Center for Responsive Politics, a non-profit group that tracks money in US politics.

And Walker often talks about penny pinching, bragging in New Hampshire this year that he once stacked so many coupons and discounts that he bought a sweater at discount department store Kohl's for $1. His disclosure for the 2014 calendar year shows a modest range of assets.

At the other end of the spectrum are Republicans Fiorina and former Florida Governor Jeb Bushand Democrat Hillary Clinton.

They are most vulnerable to criticism that they are out of touch not just because of their considerable personal wealth but also because of their association with powerful political families.

Clinton's husband, former President Bill Clinton, was ridiculed when he said recently he would keep giving paid speeches as she runs for office to "pay our bills."

He charges well into the hundreds of thousands of dollars for his speeches. The couple have earned more than $25 million for speeches since 2014 alone.

Hillary Clinton appears acutely aware that Republican opponents and others could make her wealth an issue in the campaign. At her first rally on Saturday, Clinton talked about her mother's childhood: lacking food as a child, working as a housemaid in her teens.

Bush, the scion of a wealthy family, has earned millions since stepping down as governor, including $3.2 million in board fees and stock grants, the New York Times reported in 2014. He has so far avoided discussing the issue on the trail.

Jesse Rhodes, a professor of political science at the University of Massachusetts Amherst, said deepening economic inequality in the United States has been accompanied by more frequent and more positive references to class by politicians.

Rhodes co-authored a recent paper that analyzed party materials going back to the 1952 campaign and showed a rising use of terms such as lower-, working-, or middle-class.

Fiorina has also pushed back against being tagged as elite.
She's often talked about working as a secretary in a small real estate firm early in her career, rather than her wealth or her Stanford University education.

According to a recent Federal Election Commission disclosure, she and her husband are worth around $59 million.

New Jersey Governor Chris Christie says he doesn't consider himself a wealthy man. According to tax documents released by his office, he and his wife made almost $700,000 in 2013.

Mike Huckabee, the former governor of Arkansas, talks of being born "blue collar, not blue blood." Nevertheless, he is now reportedly worth seven figures, in part thanks to a contract at Fox News reportedly worth $500,000 per year.

"Governor Huckabee is the son of a small town firefighter from Hope, Arkansas. The governor worked numerous, full-time jobs to put himself through school," a Huckabee spokeswoman, Alice Stewart, said when asked whether voters might perceive him as unable to relate to their everyday financial concerns.

A review of candidacy kick-off speeches from 2012 and 2016 candidates shows a marked shift: In the current crop of speeches, not only do more hopefuls talk about their own or their parents' working-class backgrounds, they spend considerably more time on those subjects.

Republican Senator Ted Cruz, for example, this year talked about his mother's "working class family" and his father starting out making 50 cents an hour as a dishwasher.

Not all White House contenders feel they need to play down their wealth.

Real estate mogul Donald Trump made it a key plank of his election platform when he announced his White House run on Tuesday, boasting he had a net worth of $8.7 billion and that he would use his billions to fund his campaign.

"Countries Guilty Of Supporting Terrorism Must Be Punished": PM Modi