"Left On The Doorstep": Chef Invited To Dinner With Macron Refused Entry

Michelin-starred chef Marcel Ravin was turned away from Sunday's event in the French city of Lyon despite presenting his personal invitation. 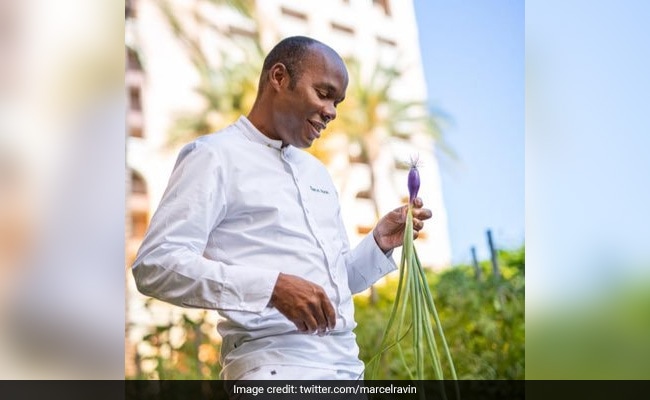 Michelin-starred chef Marcel Ravin was turned away from gala dinner.

A Michelin-starred chef from Martinique turned away from a gala dinner attended by French President Emmanuel Macron despite being one of the invited guests has denounced his treatment.

Marcel Ravin who hails from the Caribbean island but now presides over Monaco's Blue Bay restaurant, was turned away from Sunday's event in the French city of Lyon despite presenting his personal invitation.

The event, at which Macron was a special guest, was held to honour the best chefs and pastry chefs, and Ravin's restaurant holds a coveted Michelin star. But organisers refused to let him enter.

"Sad evening," he posted on his Facebook page that evening. "To be invited and end up on the pavement eating an andouillette... And they tell me we're no different.

"I'll tell you what it is to be humiliated," he added, illustrating his post with a photo of his personalised invitation.

"They told me that I wasn't on the list and their boss didn't want to know anything more," Ravin said. The experience had left him "shocked and disappointed".

Organisers of the dinner, GL Events, put it down to "an unfortunate error".

But returning to the incident on Monday, Ravin pointed out that he was a black Frenchman from Martinique who had succeeded in the industry without coming up under the wing of one of the great chefs.

"I hope that our profession will come together and that no chef recognised by his peers will ever be left on the doorstep again," he added.

The event was part of Sirha, a trade fair for catering, hotels and the food trade. Sirha Food's director, Luc Dubanchet, said nothing should be read into what he described as an "unintentional incident".

Ravin appeared to have been among the invitees who had failed to reply to the invitation. Other people in the same situation had, like him, been at first been turned away from the event.

After they had been told what had happened they had managed to catch these other guests in time, but in his case, "we were not informed in time, alas".

He apologised to Ravin and GL Events for the mistake.

On Monday, Macron was pelted by an egg while visiting Sirha trade fair in Lyon.