Man flies through a mountain in China 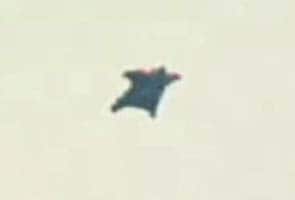 Hunan province, China: An American professional wingsuit flyer on Saturday successfully performed a jump and dive through the Tianmen Hole - an actual hole through a mountain - in Hunan province, central China.

The 35-year-old American Jeb Corliss jumped from a helicopter 6,000 feet above the Tianmen cave, flying towards it, and went right through it.

The professional wingsuit flier failed at his first attempt, but succeeded the second time round.

"That was one of the greatest wingsuit flights of my entire life. Thank you China, that was amazing," he said after he landed safely.

Promoted
Listen to the latest songs, only on JioSaavn.com
According to Corliss, the first attempt failed due to smoke brackets on his feet that did not work properly and forced him to take a detour.

He has become the first wingsuit stuntman to fly in China.