Man Fleeing From ISIS Surrenders In Syria. He Recruited 9/11 Hijackers

By his own account, he played only a peripheral role in the events that unfolded along the way, a walk-on part in the history of the Islamist militant movement. 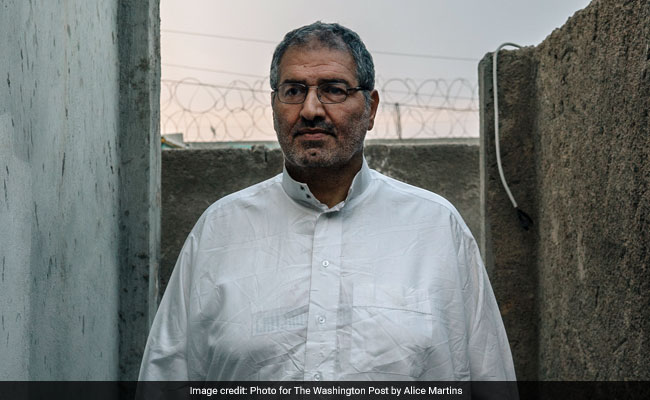 Mohammed Zammar is seen in a Kurdish-run prison near the Turkish border in Syria.

There was nothing about the hungry, bedraggled man who surrendered at a remote desert checkpoint belonging to the United States' Kurdish allies this year to suggest he had once played a part in one of the biggest events in American history. He was limping from injuries to both knees, his beard was matted and teeming with lice, and he was fleeing from the Islamic State.

After he identified himself and checks were run, the confirmation came back. This was Mohammed Haydar Zammar, the man who recruited the hijackers who carried out the attacks on Sept. 11, 2001, killing over 2,900 people and propelling the United States into unending conflict.

In his first interview with a U.S. news organization since 2001, conducted in the presence of the Kurdish guards who are holding him at a prison on the outskirts of the Syrian city of Qamishli, Zammar recounted his extraordinary journey. It was one that took him from the earliest days of the al-Qaida camps in Afghanistan to the battlefields of the Islamic State in Syria, via a rendition suspected to have been ordered by the CIA.

By his own account, he played only a peripheral role in the events that unfolded along the way, a walk-on part in the history of the Islamist militant movement. Yet he was present for many of its milestones, showing up at key moments and meeting many of its key players.

His story demonstrates the extent to which the ever-evolving terrorist threat that continues to grip the United States has, to a large degree, been sustained by a core of now-aging Islamist militants who came of age in the orbit of Osama bin Laden.

Now age 57, Zammar, who holds dual Syrian and German citizenship, is a shrunken shadow of the hulking, heavily bearded man who once lectured young Muslims at al-Quds mosque in Hamburg on their duty to wage jihad. His captors do not allow prisoners to grow beards, and his had to be shaved off because of the lice, he said during the interview, conducted in the presence of two of his guards.

But one thing has not changed. Investigators of the 9/11 attacks remember him as talkative - perhaps too talkative to have been trusted with details of the plot.

He still likes to talk, at length, about himself, about his part in persuading the 9/11 hijackers to travel to Afghanistan for military training and about the litany of injustices he says the United States has committed against Muslims.

Zammar's family moved to Germany when he was 10, and he first tried to participate in armed conflict in 1982, far earlier than has previously been reported. He traveled to Jordan in an attempt to enter Syria to join the armed wing of the Muslim Brotherhood, the Fighting Vanguard, which was engaged in an earlier uprising against the ruling Assad family.

He was turned back by the Jordanian authorities, but on the trip he met a man who would play a big role in his future: Mohammed al-Bahaiya, known as Abu Khaled al-Suri, who would later become a key figure in the current Syrian war.

At Bahaiya's invitation, he made his first visit to Afghanistan in 1991, to receive military training at one of the militant camps being run by Bahaiya. Over the next decade, Zammar moved through the militant-Islamist circuit, traveling regularly to Afghanistan, volunteering for a stint with al-Qaida-affiliated militants in the war in Bosnia and visiting London, where he befriended the Jordanian Palestinian preacher Abu Qatada, a prominent figure long suspected by the United States of having links to al-Qaida.

Meanwhile, Zammar was developing a circle of followers at Hamburg's al-Quds mosque, which had become a magnet for young Muslims in the city. Zammar says he failed to qualify as an imam or preacher at the mosque because he was unable to memorize the Koran, but he held regular gatherings with small groups of the men who went there to pray, seeking to convince them that they had a duty to wage jihad on behalf of Muslims worldwide and to travel to Afghanistan for military training.

The first member of the Hamburg cell he remembers meeting was Ramzi Binalshibh, a Yemeni citizen now being held in Guantanamo Bay on suspicion of involvement in the 9/11 plot. Next he met Mohamed Atta, the hijackers' ringleader, who piloted the first of the two planes that struck the World Trade Center towers. Zammar recalls Atta as a "good guy" with "high moral standards." Then came the others: Marwan al-Shehhi, a citizen of the United Arab Emirates who steered the plane that struck the second tower; Ziad Samir Jarrah, the Lebanese who piloted the plane that crashed in a Pennsylvania field after passengers overpowered the hijackers; and four others from the group whom Zammar also persuaded to travel to Afghanistan.

"It was not easy. It took time. They were studying at the university," he said. "I was telling them, for example, someone is going to attack you, your honor, your property, while you cannot even use a pistol. There is no country in the world that does not have an army to defend itself, while we Muslims do not."

Zammar's travels and contacts stirred the suspicions of the German authorities, who alerted the CIA and began monitoring his movements and telephone calls.

But he continued to travel widely. Toward the end of 1999, Zammar made another visit to Afghanistan, overlapping with Atta and other members of the Hamburg cell making their first visit to the country - and carrying with them their proposal to crash planes into American buildings, according to investigators.

Zammar says the timing of his visit so close to theirs was a coincidence. He arrived shortly after they did, had no contact with them and does not know where or how they spent their time, he said.

It was on this trip, he says, that he had his only encounter with al-Qaida leader Osama bin Laden, whom he recalls with reverence. He speculates that bin Laden summoned him to meet because of his association with the men who were being groomed for the 9/11 attacks and wanted to check him out.

He claims he had no further contact with bin Laden, Atta or the others and says he was as surprised as anyone when the attacks occurred.

Zammar continues to deny any foreknowledge of the 9/11 plot. "God knows, and in all honesty, I did not know anything about the 9/11 strike. They did not tell me anything," he said.

That was the conclusion reached at the time by German authorities, according to Guido Steinberg, who investigated Zammar's involvement in the attacks on behalf of the German government and is now a senior associate at the German Institute for International and Security Affairs.

The German investigation found that the members of the Hamburg cell had been suspicious of Zammar, in part because he was "very chatty," Steinberg said.

"We discovered that his passport was full of Syrian stamps. The members of the Hamburg cell did not trust him. There was chatter that he might work for the Syrians," he said.

U.S. investigators never reached a firm conclusion about Zammar's potential involvement but also suspect that he may have proved too talkative to be trusted with knowledge of the 9/11 plan, according to Ali Soufan, a former FBI agent who now runs the Soufan Center, which focuses on counterterrorism.

"These people who run their mouths usually don't get information in advance, and there's a possibility he did not know about the attacks," Soufan said. The U.S. government seems to have shown little interest in gaining custody of Zammar, Soufan said. "Maybe there was a lot of noise but no meat on the case against him," he said.

Zammar acknowledged that he was an unlikely candidate for inclusion in a sophisticated plot.

"It would be really idiotic for someone who is planning on bombing America to come to me, or someone like me, and tell them about it," he said. "Total stupidity."

The CIA, the FBI, the U.S. military and the Department of Justice declined to comment on his case.

The 9/11 attacks thrust Zammar briefly into the spotlight. German police questioned him, and he was sought by journalists for interviews.

Three months after the attacks, he dropped out of sight. While on a visit to Morocco, he was arrested by Moroccan police and deported to Syria. The CIA was reported at the time to have played a part in his seizure and transfer, but Zammar says he does not recall meeting Americans during the process.

For the next 12 years, he was held in Syria's notorious Sednaya prison outside Damascus, where he says he was tortured and kept in solitary confinement for months on end. In 2008, he was sentenced to 12 years in prison, not for his association with al-Qaida but for membership in the outlawed Muslim Brotherhood, dating back to his attempt to join the armed rebellion in 1982.

In 2013, he was freed along with six other Islamists in a prisoner swap for Syrian army officers negotiated by his old friend Bahaiya - Abu Khaled al-Suri - who had moved to Syria to become a leading figure in the Salafist Ahrar al-Sham opposition group and was killed in a bombing a year later that was suspected to have been carried out by the Islamic State.

Once released, Zammar chose to join the newly formed Islamic State. In prison, he had met several of the leaders of the group, who had been freed by the Assad government in earlier prisoner swaps. Those associates helped him secure a succession of relatively minor jobs in Islamic State departments, providing food for gatherings, mediating domestic disputes and supervising the cleaning of facilities.

But his health was poor from the years he spent in prison, he says, and he injured his knees in a car accident. He denies that he played any prominent role in the group, and there is no available evidence that he did.

As the Islamic State was steadily driven out of the vast areas it once controlled in Syria and Iraq, Zammar moved with the fighters in their retreat, dodging American airstrikes along the way. He met and married two women, and he was with one of those wives outside the village of Darnij in the province of Deir al-Zour when he decided to surrender to the U.S.-backed Syrian Democratic Forces. Joining other families also seeking to run away, they sneaked across Islamic State lines to reach the SDF.

Now he languishes in another prison cell, alongside about 30 other Islamic State prisoners being held by the Kurds. The Kurds say they would like to be rid of him and all the Islamic State captives they hold. Zammar says he would like to return to Germany, to reunite with his first wife, whom he said he hasn't seen since 2001.

But the German government has shown no interest in repatriating him or any of the other Germans who set out to fight for the Islamic State and are now in Kurdish custody.

As the interview ended and Zammar was led away, he was still talking, railing against the injustices of the world and saying he has a message for President Trump, the leaders of Europe and anyone else with a role.

"You must fear God. You must fear your creator. I swear they will be judged by God," he said, as he limped back to his cell.

(Except for the headline, this story has not been edited by NDTV staff and is published from a syndicated feed.)
Comments
Islamic StateMohammed Haydar Zammar