Chris Darnell, 40, died at the Battle Creek Field of Flight Air Show, where he was driving the SHOCKWAVE Jet Truck down a runway at more than 483 kilometers per hour. 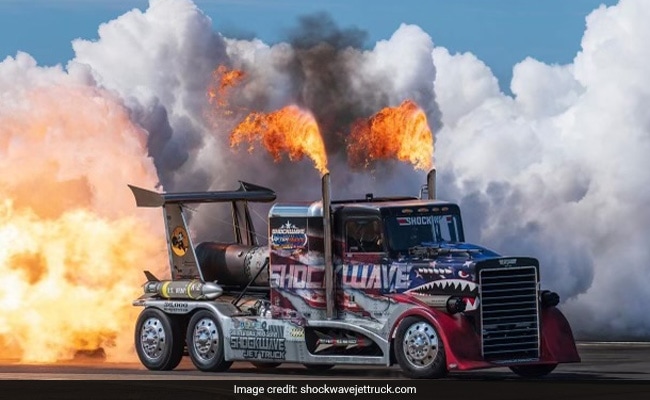 The truck was modified to carry three jet engines on the back.

The driver of a truck powered by jet engines was killed during a high-speed accident in front of spectators at an air show in the US state of Michigan, relatives said Sunday.

Chris Darnell, 40, died Saturday at the Battle Creek Field of Flight Air Show, where he was driving the SHOCKWAVE Jet Truck down a runway at more than 300 miles (483 kilometers) per hour, according to police.

"We have lost our youngest son Chris in an accident doing what he loved; performing with SHOCKWAVE," his father Neal Darnell said on Facebook. In a separate post, he said the accident was a result of "a mechanical failure on the Jet Truck."

Moments before the accident, the SHOCKWAVE was seen spewing pyrotechnic flames from its exhaust pipes, apparently a standard part of the truck performance.

The truck, which was touted as the "world's fastest semi," having once reached a record speed of 376 miles per hour, was modified to carry three jet engines on the back, providing it with 36,000 horsepower.

Battle Creek Police said the rest of Saturday's schedule was canceled but the air show would resume Sunday, and that police, fire officials and the Federal Aviation Administration had launched investigations.