The man could face up to five years in prison for illegal wildlife trafficking. 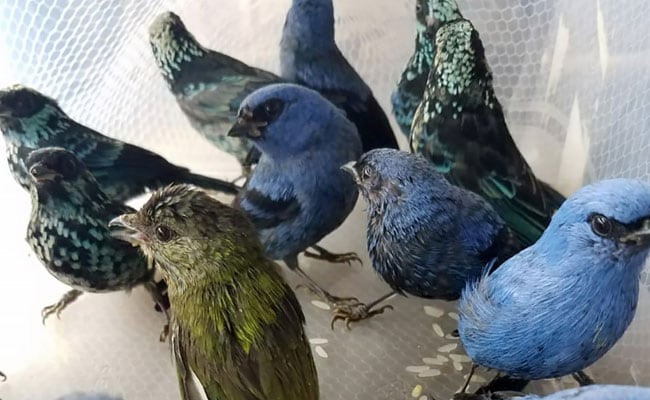 Some of the birds showed signs of dehydration and stress.

Peruvian police have arrested a Belgian man at Lima Airport for trying to smuggle 20 live birds to Europe in his suitcase, the National Forest and Wildlife Service said Wednesday.

Hugo Conings was arrested at the airport on Monday "for transporting 20 wildlife specimens" that he intended to sell in Spain, a Wildlife service officer told reporters.

Madrid-bound Conings, 54, was carrying 20 small birds in boxes inside his suitcase when he was arrested.

He could face up to five years in prison for illegal wildlife trafficking, according to Serfor.

Some of the brightly colored birds showed signs of dehydration and stress, and some had lost part of their plumage having spent hours in the boxes, the wildlife service said.

Among the 20 protected wild birds were two toucanets and 16 tanagers, small birds whose bright colors make them attractive to traffickers and collectors.

The birds are native to the Peruvian jungle, but are also found in Ecuador and Bolivia.

The South American country is considered a birdwatchers' paradise, home to more than 1,800 species.

Lucrative illegal trafficking is considered one of the main causes of biodiversity loss.

(Except for the headline, this story has not been edited by NDTV staff and is published from a syndicated feed.)
Comments
Peruwild birdsman caught smuggling birds