Muscat's spokesman would neither confirm nor deny the report. His Labour Party cancelled an event scheduled for Sunday at which Muscat was set to speak. 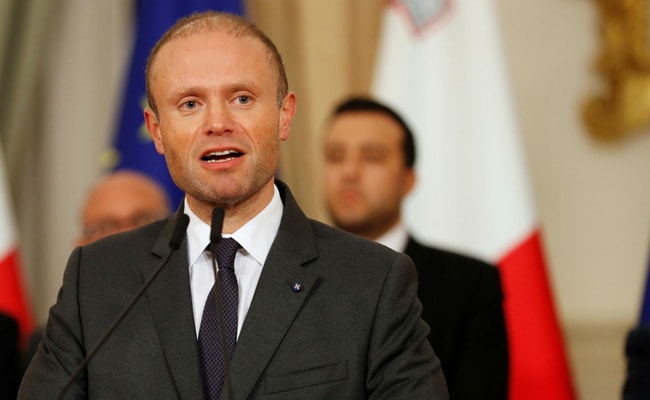 Malta's Prime Minister Joseph Muscat has told associates he plans to resign over the political and legal crisis stemming from the murder of journalist Daphne Caruana Galizia, the Times of Malta reported on Friday.

Muscat's spokesman would neither confirm nor deny the report. His Labour Party cancelled an event scheduled for Sunday at which Muscat was set to speak.

Muscat's chief of staff and two members of the cabinet have already stepped aside this week over the murder case, which threatens to bring down the island nation's close-knit elite.

Caruana Galizia, a campaigning journalist who investigated corruption, was blown up by a car bomb on Oct. 16, 2017. Her family demanded on Friday that Muscat resign, after his right hand man Keith Schembri was set free overnight.

Schembri, who quit as Muscat's chief of staff and was held for questioning in the case this week, denies wrongdoing. Police said they no longer needed him held for their investigation.

Caruana Galizia's family said Muscat should not preside over an investigation that implicates three of his closest colleagues.

"This travesty of justice is shaming our country, ripping our society apart, and it is degrading us. It cannot continue any longer," the family said in a statement.

"I will not abdicate my responsibilities. Malta needs stable leadership and I will continue to take decisions in the interests of the country and will not protect anyone," he said.

His spokesman said Muscat would make an announcement "in due course".

"The PM has pledged various times he wants to see this case through," he said.

Roberta Metsola, a Maltese member of the European parliament, said in a tweet: "If only #DaphneCaruanaGalizia was alive to see that even after they assassinated her, she brought the criminals down in disgrace."

Three men have been awaiting trial for setting the bomb that killed Caruana Galizia but so far the authorities have failed to track down the person who hired them.

The case has moved quickly in recent weeks since a middleman suspected of introducing the killers to the person who ordered the hit was pardoned in return for testimony.

Earlier on Friday, Muscat's cabinet turned down a request to pardon a businessman, Yorgen Fenech, over the murder in return for testimony that Fenech's lawyers said would implicate senior government figures, including Schembri.

Fenech, who was arrested last week while trying to leave the island in his yacht, was also freed on bail on Friday.

He appeared in court later for a hearing at which he hopes to remove the lead investigator from the case for his alleged links to Schembri, the former chief of staff to the prime minister. He will be questioned by police again tomorrow.

"I fear for my life, I'm ready to go all the way for justice to prevail and the truth to come out," Fenech told reporters outside the court.

The investigation focuses on Fenech, a businessman whose empire included property, retail, hospitality, gambling and energy companies. He handed the business reins to his brother a day before attempting to leave Malta.

In a letter to the president, Fenech's lawyers said he was prepared to give information involving Schembri and two cabinet ministers - Tourism Minister Konrad Mizzi and Economy Minister Chris Cardona. Mizzi resigned on Tuesday and Cardona has suspended himself from his duties. All three deny wrongdoing.

Dunja Mijatovic, human rights commissioner for the Council of Europe, said she was "seriously concerned by recent allegations of political interference in the investigation" and called on Muscat to prevent the appearance of collusion.

Before she was killed, Caruana Galizia had revealed the existence of a secret offshore company called 17 Black. A Reuters investigation last year revealed Fenech was the owner of the company, named in emails as a vehicle to fund secret Panama companies owned by Schembri and Mizzi.

There is no evidence that money changed hands and Mizzi has said there are no links between him and Fenech's company. Cardona has also denied involvement.

One of Fenech's companies formed part of a consortium which was awarded a government contract in 2015 to build a power station. Other partners in that consortium included SOCAR of Azerbeijan and Siemens. Siemens and SOCAR have both denied their staff was involved in wrongdoing.

In a separate case on Friday showing how the corruption allegations have closed in on the government, a court ordered Mizzi, Cardona and Finance Minister Edward Scicluna to face a criminal probe over the granting of a contract to run hospitals. The three all deny wrongdoing in that case.