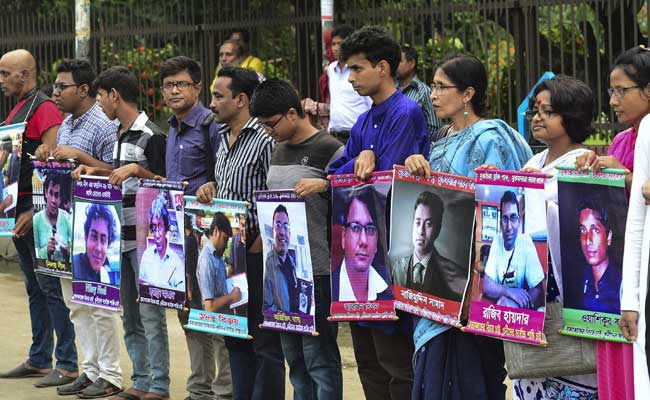 Bangladeshi activists hold the photos of activists, writers and bloggers who were murdered. (AFP Photo)

Dhaka, Bangladesh: Bangladesh police today killed an extremist with a bounty of Taka 500,000 on his head for murdering secular bloggers, as authorities stepped up their nationwide crackdown on extremists in the Muslim-majority nation that has seen a string of brutal attacks on minorities and activists.

"We have found out that he was a member of Ansarullah Bangla Team and one of the six extremists for whom we earlier announced a bounty of Taka 500,000 (USD 6374)," a senior police officer said.

He said the extremist was killed in a pre-dawn encounter in Dhaka and was named in a police list as Shariful or Sharif, but he previously used several other names like Sakib alias Saleh alias Arif alias Hadi-1.

The officer said Sharif was wanted for the murder of Bangladesh-born American science writer and blogger Avijit Roy, who was hacked to death by several men as he returned from a Dhaka book fair in February last year.

The extremist was also believed to have been directly involved in the subsequent killing of another blogger Niladri.

The identification of the alleged extremist came hours after police said a "miscreant" was killed in a shootout with police detectives in the capital's Khilgaon area.

Sharif was a firearm and ICT trainer and key-recruiter of ABT, which along with Jamaatul Mujahiedeen Bangladesh (JMB), is blamed for a series of fatal attacks on secular or liberal activists and religious minorities, according to a post on the website of Dhaka Metropolitan Police.

Sharif's death came a day after another extremist, who was arrested four days ago while carrying out an attack on a Hindu college teacher in southwestern Madaripur, died in a shootout.

The 17-year-old, identified as Golam Faizullah Fahim, was killed in the surprise shootout a day after police secured a court order to interrogate Ms Fahim in custody in connection with the murder attempt on Ripan Chakraborty, 50, a mathematics lecturer of a government university college in Madaripur.

Bangladesh in recent months witnessed a series of deadly clandestine attacks on religious minorities and secular and liberal activists.

But Ms Fahim, a student of a college in Dhaka, was the lone assailant to be grabbed by people in the neighbourhood though two other attackers fled the scene while Mr Chakraborty survived the assassination attempt sustaining critical head injury.

Al Qaeda in Indian Subcontinent claimed responsibilities for most of the attacks. However, authorities attributed the attacks to home grown terrorist outfits like Jamaatul Mujahideen Bangladesh or Ansaral.