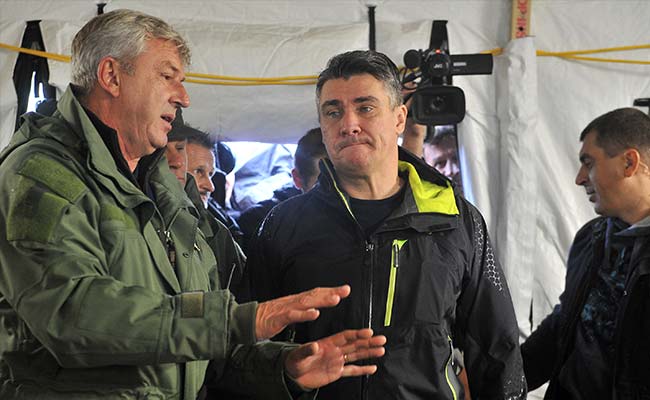 Zagreb: Croatia votes in a general election Sunday, with the nationalist conservative opposition bidding to take power from a centre-left alliance that has largely failed to implement promised reforms.

Here are profiles of the leaders of the two main political parties:

Driven and smart but lacking a common touch, Croatian career diplomat turned premier Zoran Milanovic is battling for a second term in power after failing to live up to high expectations.

When he came to the helm four years ago at the age of 45, the SDP leader was perceived by many as a promising young politician, free of the corruption plaguing the rival HDZ party.

But his inexperienced government failed to implement much-needed reforms, perpetuating widespread patronage and poor economic trends, sending his support plunging to a record low of 20 percent a year ago.

"After winning the elections on moral rather than political grounds as people had had enough of corruption, the SDP continued with the old system of 'your guys out, my guys in'," political analyst Zarko Puhovski told AFP.

Born in Zagreb in 1966, Milanovic emerged as one of the best law students of his generation and an avid amateur boxer.

He worked in the foreign ministry during the former Yugoslav republic's 1990s independence war, and afterwards served for three years with Croatia's EU and NATO missions in Brussels.

In 1999 he joined the SDP, formerly the communist party, seeing its appeal to progressive, educated and urban voters as the perfect counterweight to the 'rural' values promoted by the nationalist HDZ, then in power.

Winning kudos as a sharp speaker and without links to the SDP's communist past, the married father-of-two was elected party leader in 2007.

Milanovic's coalition is now polling just behind Croatia's right-wing alliance, bolstered by a small return to growth after six years of recession, and recent populist measures such as a law converting Swiss franc loans into euros to help borrowers.

The premier's handling of the migrant crisis as thousands stream through Croatia may also have helped his image, say analysts.

An increasingly patriotic and combative approach has been attributed to a new PR expert hired by his party -- but it may be too little, too late to clinch another victory.

A former intelligence chief and now opposition leader, Karamarko is aspiring to become premier by pledging to return to the roots of Croatia's nationalist founding father.

The 56-year-old has stressed the "genuine patriotism" of the right-wing HDZ, with constant references to the past, especially Croatia's 1990s war and its first president Franjo Tudjman, who set up the party.

"We are starting a second Homeland War for Croatia!" Karamarko told a gathering of the party's youth in October, referring to the conflict that marked the end of Yugoslavia.

He has fired on his centre-left opponents for not "having Croatia in their hearts", in reference to the SDP's communist roots.

But Karamarko's own variegated political path has cast doubt on the sincerity of his political beliefs -- he quit the party in 1993 and only rejoined in 2011.

In between he led the successful campaign of centrist presidential candidate Stipe Mesic -- who was staunchly against Tudjman, the man Karamarko now emulates.

Analysts suggest the right's slight lead in opinion polls has more to do with the government's failings than the uncharismatic Karamarko.

"There's nothing in his career that gives me any hope he will be a good prime minister," said Southeast Europe expert Josip Glaurdic.

"He's concerned with building his circle of trusted people. Those are the kind of things he's good at: plotting in the background."

Under Mesic, former history student Karamarko became the president's national security advisor and went on to head Croatia's intelligence services as interior minister from 2004 until 2008.

He won a parliamentary seat for the HDZ in 2011, and became party leader the following year, pledging a "new, more honest HDZ" after the party was hit by corruption scandals.

Recently remarried and a father of three, Karamarko has refused a public debate with Milanovic ahead of Sunday's vote, saying his opponent lacks a programme.