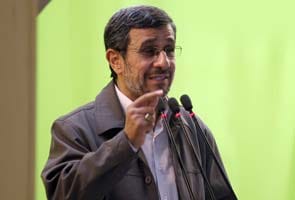 "Considering the profuse experience you gained during eight years of worthy efforts, I appoint you as a member of the Expediency Council," read a statement posted on Khamenei's website.

The council is headed by ex-president Akbar Hashemi Rafsanjani who repeatedly criticised Ahmadinejad during his turbulent eight-year presidency for his controversial political and economic policies.

It is dominated by conservatives and acts as an advisory body for Khamenei, the supreme leader of the Islamic republic who has final say on all key policies, including nuclear talks and foreign policy.

He was succeeded by moderate cleric Hassan Rowhani, who has promised to engage constructively with world powers over Iran's contentious nuclear drive and to stave up the shrinking economy.

In the last two years of his presidency, Ahmadinejad fell from grace with Khamenei following a public power struggle, and during his tenure he was also involved in high-profile feuds with parliament speaker Ali Larijani and judiciary chief Ayatollah Sadeq Larijani.

Promoted
Listen to the latest songs, only on JioSaavn.com
It is also tasked with resolving legislative issues between the parliament and the Guardians Council, which interprets the constitution.