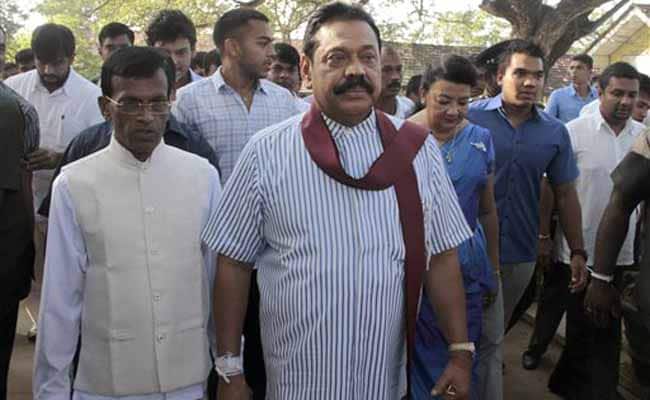 Colombo: A complaint was lodged on Tuesday against Sri Lanka's former president Mahinda Rajapaksa and his family members over graft claims by a key partner of the new ruling coalition, days after President Maithripala Sirisena took over.

The Marxist Janatha Vimukthi Peramuna (JVP) called on the Bribery and Corruption Commission to probe Rajapaksa and his family members over the allegations.

"This morning we lodged a complaint against Mahinda Rajapaksa, Basil Rajapaksa, Namal Rajapaksa and Gotabhaya Rajapaksa to the bribery commission," said Vijitha Herath, a JVP legislator.
The JVP complained about 12 individuals and institutions, which also include two ministers while others are high-ranking officials of the Rajapaksa dispensation.

Herath said his party expects the watchdog to launch a full-scale investigation into the bribery and corruption allegations.

Rajapaksa, meanwhile, has responded to the reports that he may flee the country, saying he would stay and continue to fight.

In the run-up to the January 8 presidential elections, the opposition had accused Rajapaksa and his family of being involved in large-scale corruption, nepotism and of having a disregard for law and order and good governance.

Opposition had severely criticised Sri Lanka's central bank for investing in what was termed as Greece "junk bonds" in the aftermath of the euro crisis.

It said Sri Lanka invested in those bonds against normal procedures and regulations which resulted in the country incurring a loss of Rs 2 billion.

The results of the polls were a shock for Rajapaksa, who had ruled the country for 10 years.

Promoted
Listen to the latest songs, only on JioSaavn.com
Newly-elected President Maithripala Sirisena, in his election manifesto, had pledged a 100-day programme to set up independent commissions to suggest ways to free key governance sector of political interference.