A cultural team from the Indian Embassy in Beijing sung some of Mahatma Gandhi's most popular bhajans. Gandhiji's popular quotes were also recited by the Chinese school children. 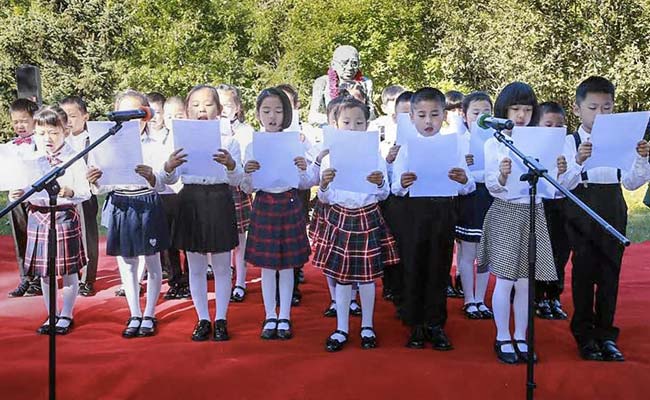 Mahatma Gandhi's popular quotes and bhajans resonated in the sprawling Chaoyang Park in central Beijing today. People from all walks of life gathered to commemorate his 149th birth anniversary of Mahatma Gandhi.

A cultural team from the Indian Embassy in Beijing sung some of Mahatma Gandhi's most popular bhajans. Gandhiji's popular quotes were also recited by the Chinese school children.

The statue of Mahatma Gandhi, carved by China's acclaimed sculptor and artist Yuan Xikun was installed in the park in 2005, providing an opportunity for all his admirers to pay homage to him.

Besides Mahatma Gandhi's statue, Mr Yuan had also sculpted the bust of Rabindranath Tagore which is displayed in the museum attached to the park.

The statue was garlanded by the Charge d'affaires of the Indian Embassy Acquino Vimal. A large gathering of Indian diplomats, including Mr Vimal and other Indian expats attended the function.

"Starting today, Embassy of India, in collaboration with others in China, intends to celebrate in a major way the birth anniversary of Gandhiji," Mr Vimal said.

"Gandhiji did not visit China, however his thought and philosophy has been recognised and appreciated by Chinese thinkers," he added.